India   All India  16 Jun 2018  Navy restricts movement of merchant vessel on fire from drifting towards B'desh
India, All India

An Indian Navy specialist team led by its Marine Commandoes from Vizag, arrested movement of MV SSL Kolkata by anchoring the cargo ship. 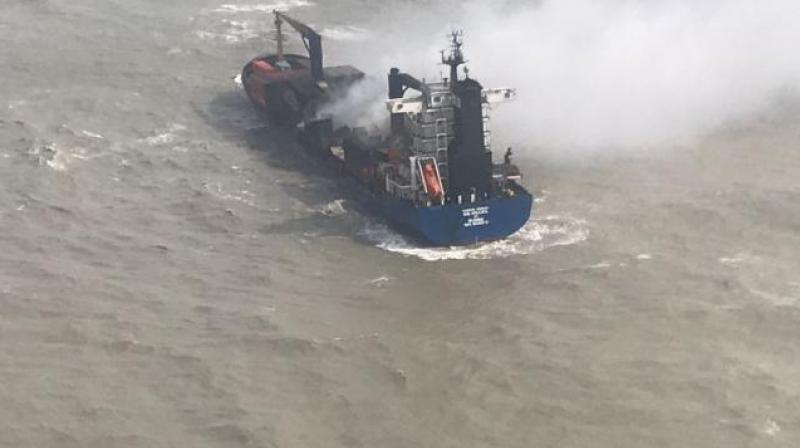 The container cargo vessel's rapid movement towards the IMBL had caused ecological and national concern among the security agencies. (Photo: ANI/Twitter)

Kolkata: Launching a swift operation, an Indian Navy specialist team led by its Marine Commandoes (MARCOS) from Vizag, arrested the movement of MV SSL Kolkata by anchoring the cargo ship, still on fire, from drifting towards the international maritime boundary line (IMBL) in the Sundarbans delta between India and Bangladesh.

The MV SSL Kolkata had caught fire in the wee hours of  June 14 and 22  crew members were successfully rescued by the Indian Coast Guard.

The container cargo vessel's rapid movement towards the IMBL had caused ecological and national concern among the security agencies.

Despatched by the Eastern Naval Command to anchor the merchant ship which is presently adrift off Sandheads, the specialist team was winched down by a Sea King 42C helicopter of the navy which took off from the Kalaikunda Air Force Station (AFS) in West Midnapore early in the morning, according to sources.

Giving details of the operation, sources revealed that the MARCOS and three crew members of SSL Kolkata were winched down at around 9.30 am and one anchor has been dropped to arrest any further movement of the ill-fated vessel.

Subsequently, the team has been safely recovered by the chopper, sources said while adding that now it will be much easier for salvage operations to commence.

Commodore Suprobho K De and his team completed the operation in less than an hour, the Sea King 42C chopper flew back with the specialist team to Kalaikunda AFS.