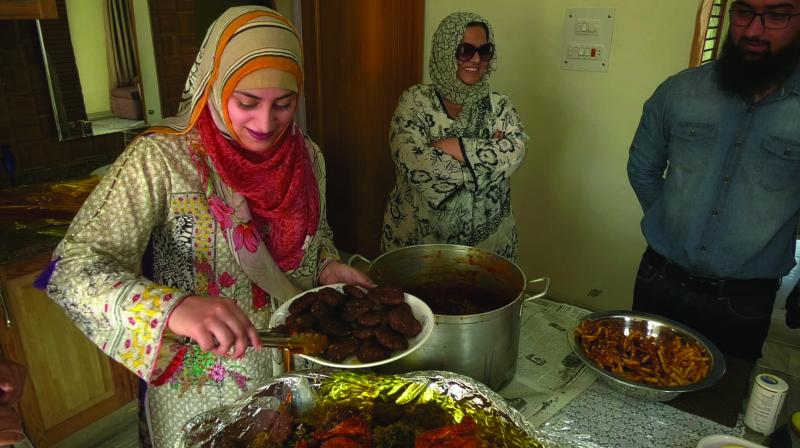 Srinagar: Kashmir is known for a wide range of striking dishes and recipes, Wazwan being the ultimate spread. Wazwan is a multi-course meal in Kashmiri banquet prepared on special occasions such as weddings. It has, with large number of local people leaving the Valley for varied reasons, travelled to various other parts of the country including Delhi and Mumbai and is now also served internationally at food festivals and reunions.

Though Wazwan, the delicious scented  food,  will remain an unsurpassable custom of Kashmiri cuisine, the people of the Valley, especially summer capital Srinagar, are now developing an appetite for Pakistani food as well.

Pakistani dishes, necessarily the delicacies from Lahore — the land of  food lovers — is increasingly becoming popular among the Srinagarites over the past some time and the credit for this goes to Mahnoor Aarif, a Lahorian married to a Kashmiri.

Ms Mahnoor got married to her cousin Hamza Farooq in 2014. Mr Farooq, a Srinagar resident, was along with other family members on a visit to Lahore to attend the wedding of Ms. Mahnoor’s elder sister and it was when the two families made the marriage proposal. Soon Ms Mahnoor tied the nuptial knot with Mr Farooq and then shifted to Srinagar. “We used to come to Kashmir earlier also to spend summer vacations. I already knew everything about the place, its people, their culture, their customs, their food choices, everything. What I couldn’t attempt on is learning Kashmiri,” she said with a huge smile on her face.

Mr Farooq , a hardware engineer, found in his bride, apart from a well-mannered and cultured woman, a good cook too. Acknowledging  it, a family member said, “We were delighted to see that apart from being a well-behaved and deferential girl she is a very good cook”. She added, “It was for this reason that after sometime the idea of starting a restaurant of Pakistani cuisine clicked.”

Ms Mahnoor said, “They said what you cook is something different and very tasty too. It was suggested that these Pakistani recipes should be served to some close relatives and friends and see their response. Then everybody asked why don’t you open a restaurant. Bas aise hi shoroo hogaya (It started like that).”

She besides serving Pakistani cuisine mainly Punjabi specialities at her restaurant, opened on August 1, 2017, supplies them in huge quantities on prior orders and with each passing day such requests are puffing up. “It is colourful, tastes different and is served in ample quantity. People here like it,” she said. Endorsing her, Mr Farooq said, “The response is very good. Praise be to Allah, the number of customers is increasing by the day. We are getting lots of special orders too.”

Khazim, a customer while acknowledging the food cooked by Ms Mahnoor and served at her restaurant, said, “Our own delicacy is Wazwan. What they serve here is something new. It is good and tasty too. In fact, some of my friends had experienced it and they went all praise for it. That is how I decided to come here and give it a try.”

Ms Mahnoor said, “Our families have been very supportive —both here as well as there in Lahore. I get the ingredients which are not available here in Kashmir from Pakistan. The spices I use are different. My presentation is dissimilar too.”

Her younger sister Sundus Aarif, who is on a brief visit of Srinagar, said, “She was known as a good cook back in Lahore too. I learnt that people here are also liking het Pakistani and other delicacies.”