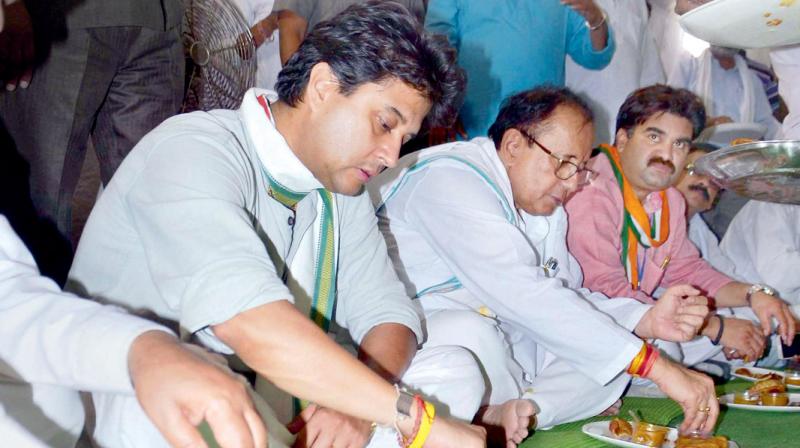 Congress leader Jyotiraditya Scindia having a meal with party leaders and workers during his 72-hour satyagraha in Bhopal. (Photo: PTI )

Bhopal: One more debt-ridden farmer in Madhya Pradesh has committed suicide. With this, the number of farmers taking the extreme step to escape debt burden in the last one week in MP has increased to five.

In the latest case, one Narmada Prasad Yadav of Chaparasar village under Hosangabad district committed suicide by consuming poison after the local moneylender allegedly forcibly took away Rs 45,000 from him on Wednesday evening.

According to the complaint lodged by the victim’s brother, Ashok Yadav, in the local police station, Prabhakar waylaid Narmada when the latter was returning home after selling farm produces in the local market and forcibly took away Rs 45,000 from him.

Narmada was so depressed over the incident that he committed suicide. He died on Thursday morning.

Meanwhile, chief minister Shivraj Singh Chouhan continued the damage control exercise in Malwa region, which was on the boil following June 6 police firing at Mandsaur, in which six farmers were killed, for the second day on Thursday. He addressed at least one dozen public meetings in Mandsaur-Neemuch-Ratlam region, called Malwa belt, where he assured farmers all help by his government to address their problems.

He launched a damage-control exercise by visiting the victims families’ and distributing Rs 1crore compensation.