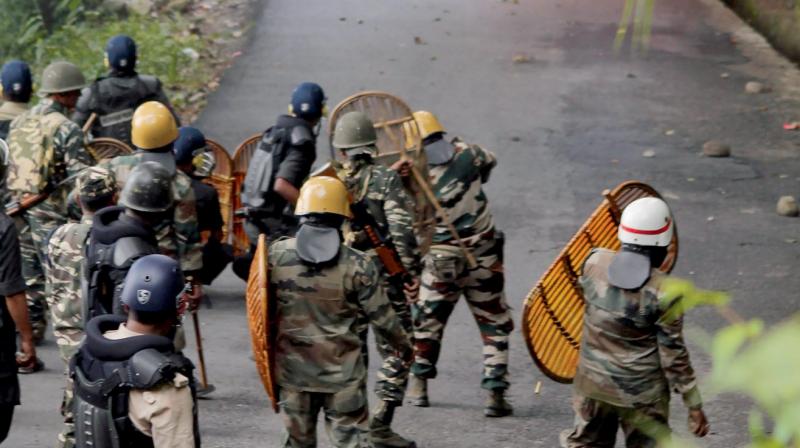 Policemen stand near a burning car during clashes with GJM supporters in Darjeeling, West Bengal, on Thursday. (Photo: AFP)

New Delhi: The home ministry on Thursday rushed an additional 400 paramilitary personnel to Darjeeling taking the total deployment of central forces to 1,400, including 200 women security personnel.

Mr Giri said he informed the home minister about their demands and the protest in Darjeeling, especially the issue of statehood and decision of the state government to introduce Bengali in schools. The GJM urged the Centre to immediately intervene to help restore normalcy.

Mr Giri also clarified the GJM will not take part in the June 19 meeting as they are strongly supporting the demand of full statehood. He also criticised raids by the state police on GJM offices. “The home minister has assured us that he would take up the matter with the Prime Minister to find out a solution,’’ he added.

He said the state should not make Bengali mandatory in Darjeeling schools and issue an order to this effect to help defuse the situation. He also called for a political solution to the Gorkhaland issue saying police action was not acceptable. The home ministry is closely monitoring the situation there even as officials admitted that violent protests were still continuing in certain parts of the district. Officials also confirmed that the West Bengal government had so far not sent a detailed status report to the Centre, which had been sought a few days ago.

The GJM has been leading the agitation demanding full statehood even as most private and government establishments have remained shut over the last few days. The GJM agitation, which also controls the Gorkhaland Territorial administration (GTA), has forced tourists in the hill station to leave Darjeeling. In some places, the agitation turned violent with protesters resorting to stone pelting also. The home ministry has once again reiterated that it would provide all necessary support to the state government, but it is primarily the responsibility of the local administration to control the situation.

The West Bengal government has so far adopted a hardline on the issue refusing to have a dialogue with the protesters on the core issue of a separate full Statehood.