HM said arms, narcotics, fake currency notes are smuggled into India via the international border along NE as these areas remain un-policed. 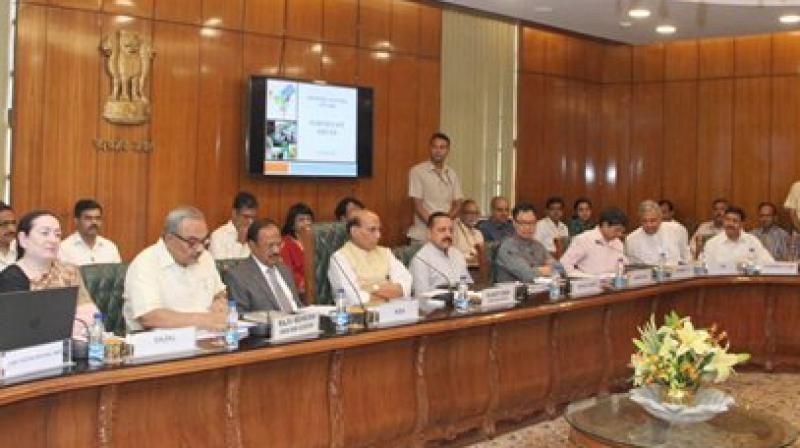 New Delhi: Home Minister Rajnath Singh on Tuesday described religious radicalisation as a serious security threat and said if not checked in time, it could lead to terrorism.

Singh, who reviewed the security situation in the Northeast with chief secretaries and DGPs of the region in New Delhi, also expressed concern over the proliferation of illegal arms in the region and asked the police chiefs to launch organised campaigns against arms smugglers.

"If we talk about the future security threats, radicalisation has come as a huge security challenge. Radicalisation is a trans-national phenomenon. If we can't check it, it will turn into terrorism," he said at the meeting which was also attended by NSA Ajit Doval and other top security officials.

Singh said arms, narcotics and fake Indian currency notes were being smuggled into India through the international border abutting the Northeast. "These borders are practically un-policed. There is need to set up more police stations on the border areas as these will check cross-border crimes and bring a sense of security to the people who live in these remote areas," he said.

The home minister, however, said there had been a significant improvement in the security situation in the Northeast in last few years. "Most of the areas are now free from insurgency and militants have been losing support even in the few pockets where they have influence," he said.

Singh said this had been made possible by effective counter-insurgency operations, a responsive development orientation and improved relations with neighbouring countries. "(But) in some areas, armed gangs are indulging in extortion, kidnapping and abduction in the name of militancy," he said.

The home minister also asked the police chiefs to ensure that surrendered militants staying in designated camps did not indulge in crime. "There is a need to keep all cadres of underground groups, which are engaged in peace talks with the government, in designated camps and ensure that they follow agreed ground rules. I am told some are involved in violent criminal activities such as extortion and kidnapping," he said.