India   All India  16 May 2017  Students of JNU welcome HC order on Najeeb, still sceptical if CBI will investigate independently
India, All India

'The CBI might not be the best ones to handle it, but will be better than the Delhi police,' JNU student Rahul Rajkhowa said. 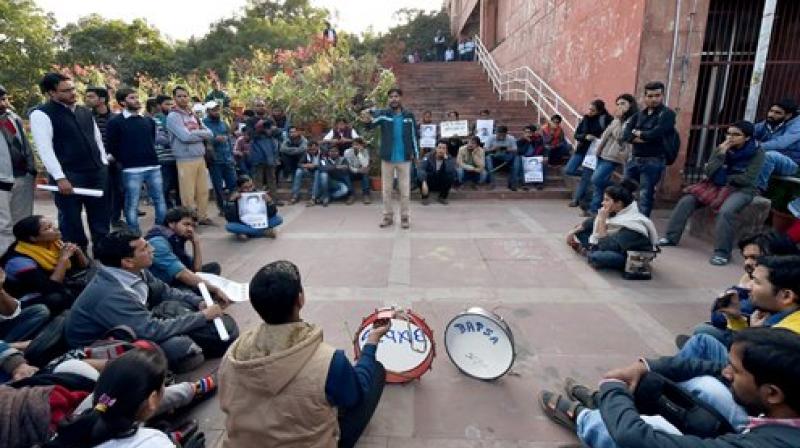 Former JNUSU Vice President Shehla Rashid said the order was a ‘vindication’ of the contention that the Delhi Police had failed to do its job in finding Najeeb. (Photo: AP)

New Delhi: Jawaharlal Nehru University (JNU) students on Tuesday welcomed the Delhi High Court order transferring the Najeeb Ahmad case from the Delhi police to the CBI, but wondered if the government's investigation agency would be given a free hand to probe the disappearance of the JNU student.

"It is a good move, but we were demanding an independent enquiry monitored by the court. Even the CBI functions under the ambit of the central government and can be influenced as we have seen in several cases," JNU students' union (JNUSU) President Mohit Kumar Pandey said.

Former JNUSU Vice President Shehla Rashid said the order was a ‘vindication’ of the contention that the Delhi Police had failed to do its job in finding Najeeb, who has not been seen for the last seven months.

"The High Court's order is a welcome move. But the question is, will the central government allow the CBI to function independently," she asked. Rashid said a court-appointed Special Investigation Team (SIT) --"something that is free of Modi government's influence" -- would have been a better move.

A bench of Justices G S Sistani and Rekha Palli on Tuesday transferred the case to the CBI on a plea from the student's mother after the Delhi Police said it had no problems with the case being moved.

The court said the probe by the CBI would be supervised by an officer, holding a rank not lower than that of a DIG. The student disappeared on October 14, 2016, a day after he allegedly had an altercation with students of the Akhil Bharatiya Vidyarthi Parishad, a students' group affiliated to the ruling Bharatiya Janata Party.

The ABVP has denied any involvement in Najeeb's disappearance. "It is a very good step. We have to trust the system. We hope Najeeb is found," the general secretary of the Alumni Association of JNU, Devendra Choubey, said.

JNU student Rahul Rajkhowa, who mentioned Najeeb in a rap song that went viral on the social media last week, said it was ‘essential’ that the CBI took over the case. "They might not be the best ones to handle it, but will be better than the Delhi police," he said. He hoped that there would be no ‘political pressure’ on the CBI. "We hope the investigation is taken up in a fair manner," he added.

JNU Teachers' Association president Ayesha Kidwai hoped that the CBI would take up the search for Najeeb with an ‘earnestness’ that ‘nobody, neither the police nor the JNU administration’, had exhibited so far. "The JNU community is looking for Najeeb as well as for accountability for the torture that his family has been put through," she said.