On the presidential polls, Kumar said the BJP needed to form a consensus on the next President. 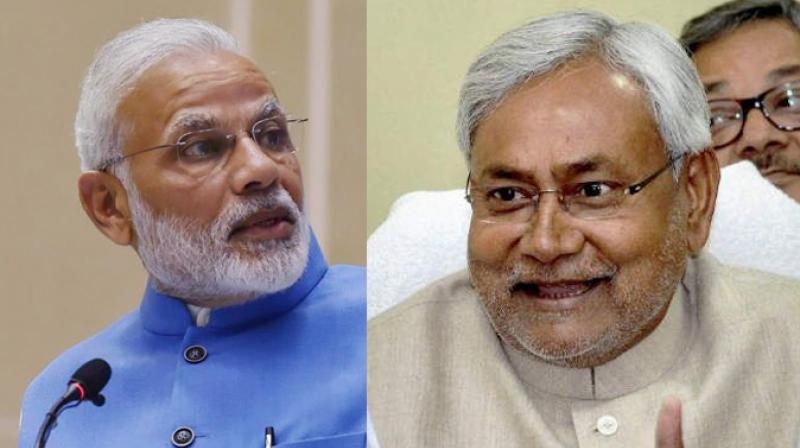 New Delhi/Patna: Amid ongoing speculation that the JD(U) and BJP could be looking at the possibility of  reuniting before the 2019 general election, Bihar chief minister Nitish Kumar once again slipped in some good words for Prime Minister Narendra Modi on Monday. He also ruled himself out as a prime ministerial candidate for the 2019 polls.

He pointed out that five years back, when Mr Modi was Gujarat chief minister, he was “not anywhere in the frame for the post of Prime Minister”. He then added: “But it happened because he (Modi) was capable of that, and the people of our country voted him to power.”

As for himself, Mr Kumar said: “I am the leader of a small party and I have no national ambitions.” Mr Kumar said he does “not have the capacity” to become PM.

“As a party president, I will try to expand the JD(U) in other states, but it does not mean that I will dream of the Prime Minister’s post,” said the Bihar chief minister The JD(U) chief also stuck to a middle path in the EVM controversy. While he felt elections should be held with EVMs, he also said that “all apprehensions about the use of EVMs must be cleared”. While several parties have alleged that the BJP had rigged the recent elections by tampering with EVMs, Mr Kumar said: “We have seen how elections were conducted earlier. I do not wish that time to come again.”

While Mr Kumar tacitly praised Mr Modi, he also spoke about Opposition unity ahead of the 2019 general election. Questioned on the move for a grand alliance of non-BJP parties ahead of the Lok Sabha polls, Mr Kumar said the Opposition parties should be united at the national level. “Like Bihar’s Grand Alliance, there is a need for the unity of all non-BJP parties.”

While speculation raged over the JD(U) moving closer to the BJP, reports of differences between Mr Kumar and his ally, RJD supremo Lalu Prasad Yadav, continued to surface.

On the presidential polls, Mr Kumar said the BJP needed to form a consensus on the next President. “Will be good if Pranab Mukherjee becomes President again,” Mr Kumar said, and added: “But it is for the ruling party to take the initiative.” Mr Kumar had a brief meeting with the President last week at Rashtrapati Bhavan, sources said.