India   All India  16 May 2017  Mishra submits scam evidences to CBI, says Kejriwal's game is over
India, All India 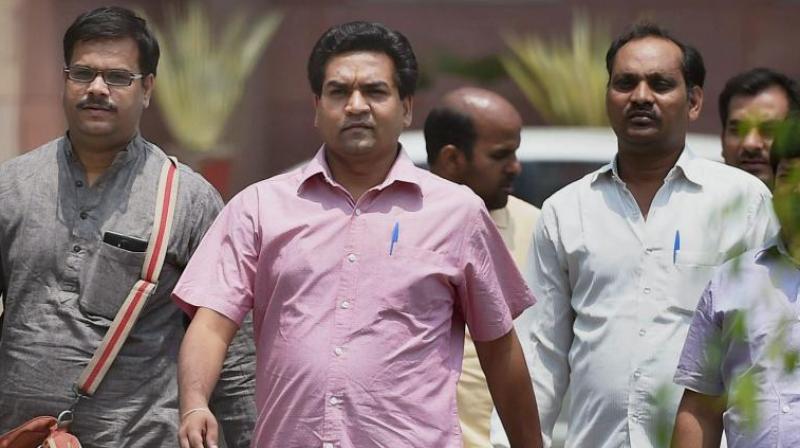 "Every document and evidence related to fraud companies and donation scams has been submitted to the CBI. There are many corrupt cases coming out now, and each of these issues, will be thoroughly probed. The man who used to say he would contest the elections fairly, his reality is in front of us now," Mishra told media here.

He said the party is being run on black money.

"They were continuously lying to the Election Commission and the income tax department. This is a very corrupt case which we have put in front of the public. We are here in the CBI office to unveil the corruption of Kejriwal," he asserted.

After threatening to drag Kejriwal to Tihar Jail, Mishra on Tuesday approached the CBI and the Central Board of Direct Taxes (CBDT) to submit evidences of corruption against the former.

Before heading to the CBI, Mishra said, "Kejriwal's game is over. He should now get prepared to go to Tihar."

On Sunday, addressing a press conference, Mishra said, "Arvind Kejriwal have some shame. If you don't resign by today evening, I will drag you from your office to Tihar Jail."

Mishra further alleged that for three continuous years, black money was converted into white and spent on the foreign trips of the AAP leaders.

"The AAP did not inform about some of its funding which it received from fake companies," he said.

"These fake companies are registered in the name of the AAP MLA from Moti Nagar, Shivcharan Goyal. These companies have given Rs. two crore to Kejriwal at 12 a.m. The funds received from these companies were sent to the same branch of the Axis Bank where there were allegations of converting black money into white at the time of demonetisation," he added.

He further alleged that the AAP has its bank account at the Krishna Nagar branch of Axis Bank and all the transactions happen from there.

Mishra also showed a blank cheque without a date which has already been encashed.

"I filed a case against Arvind Kejriwal in Central Bureau of Investigation on Monday in connection with conversion of black money to white," the AAP leader said.

Rubbishing the allegations, the AAP said that the party followed all norms in the matter, adding that the charges levelled against it are just part of the conspiracy planned by the BJP.

"It is all a part of the conspiracy by the BJP to malign the image of the party and de-recognize it. One year ago, even the Prime Minister levelled such allegations against us, and now, through Kapil Sharma is repeating the similar statement. What the BJP says, Kapil Mishra repeats," said AAP leader Sanjay Singh.