India   All India  16 May 2017  Behaviour staged by MLAs on Monday lowers esteem of Vidhan Sabha: UP Governor
India, All India

Behaviour staged by MLAs on Monday lowers esteem of Vidhan Sabha: UP Governor

The ear-splitting sound of a whistle, uninterrupted slogan-shouting by Opposition members continued through the 35-min address by governor. 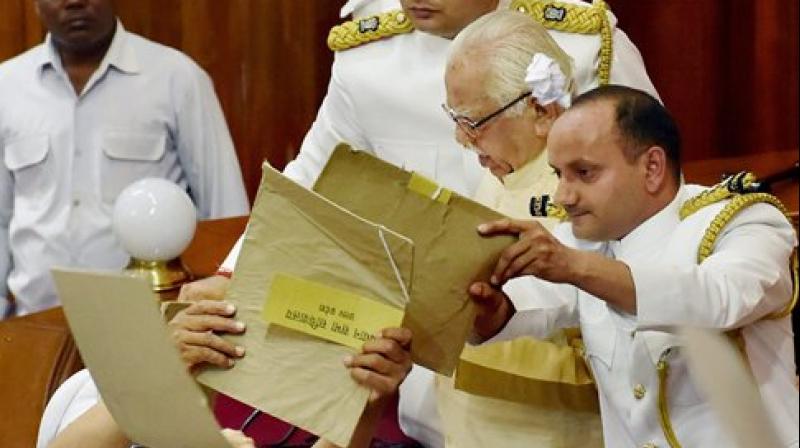 Marshals protecting UP Governor Ram Naik from paper balls thrown by agitating opposition MLAs during his address to the first sitting of the 17th Uttar Pradesh Assembly in Lucknow on Monday. (Photo: PTI)

Allahabad: Uttar Pradesh Governor Ram Naik on Tuesday deplored the behaviour of MLAs belonging to the Samajwadi Party, BSP and Congress who had on Monday disrupted his address in the state Assembly and bombarded him with paper balls.

"What happened inside the Vidhan Sabha was unfortunate. Incidents like these lower the esteem in which the House is held. I am bewildered by the objections raised over the contents of my speech when it is well-known that the Governor's address is prepared by the state government", Naik said.

In the city to take part in an event, Naik however supported the Yogi Adityanath led BJP government on the law and order front. Asked about the allegation that he was being partisan in refusing to take note of the Opposition's charges on the law and order issue while having been vocal on the issue in the past, Naik said "as far as I have been able to observe, the current government has the resolve to tackle law and order problems with a firm hand".

He was replying to journalists' queries before delivering a speech at a symposium organised by UP Rajarishi Tandon Open University on the occasion of the birth anniversary of RSS ideologue Deen Dayal Upadhyay.

On Monday, Opposition MLAs had flung paper balls at Naik, which marshals tried to frantically deflect with files, during the opening session of the new Uttar Pradesh assembly which presented a spectacle of complete mayhem.

The ear-splitting sound of a whistle and uninterrupted slogan-shouting by opposition members continued through the 35-minute customary address by the governor, but the 83-year-old Naik had stood his ground and read out the 84-page speech.

In his speech on Tuesday, Naik called for drawing inspiration from the ideal of "simplicity in life as exemplified by Deen Dayal Upadhyay" and his philosophy of 'integral humanism' wherein "equal importance has been given to material well-being and spiritual enlightenment".