Corona surge in Karnataka: 34 cases in one day, 17 from Belagavi alone 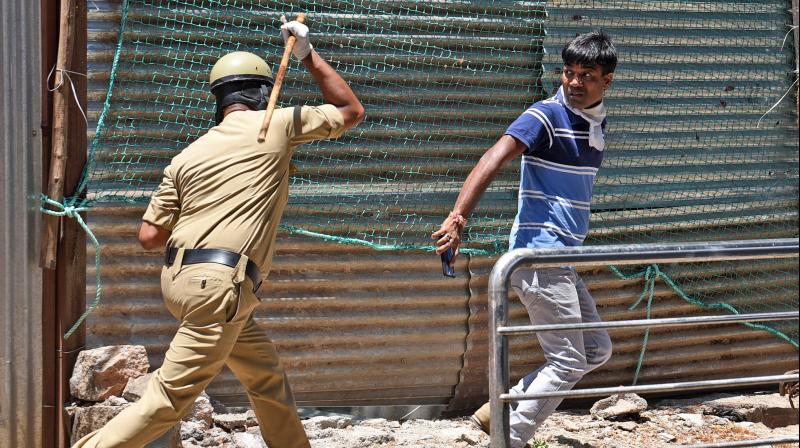 A policeman chases away a man from a coronanvirus hot-spot in Tippu Nagar on Mysore road in Bengaluru. (DC Photo: Satish B)

Bengaluru: A raft of 17 new coronavirus cases from Belagavi district sent Karnataka’s COVID-19 graph zooming up to 313 today, up 34 since the Wednesday evening’s bulletin.

Added to this, the capital city Bengaluru witnessed the death of a senior citizen due to the virus.

In addition to Belagavi’s 17, Vijayapura contributed seven to Thursday’s surge of cases. Five new cases were reported from Bengaluru, three from Mysuru and one each from Kalburgi and Gadag.

This was the highest ever spike in new cases since Karnataka recorded its first corona positive case on March 9.

The death of a senior citizen in Bengaluru, was Karnataka’s 13th corona virus fatality. He was a 66-year-old male patient who was referred to the Victoria Hospital in Bengaluru. He had been on ventilator support since April 10 and died on Wednesday.

Of the 17 cases from Belagavi, 12 were contacts of two patients who had been exposed to people with travel history to New Delhi.

The remaining five cases from Belagavi are a puzzle to health officials as they had tested negative just a week back. All the five of them have travel history to New Delhi.

All the seven cases from Vijayapura were contacts of three corona positive cases. This lot includes a child of 18 monnths. They are now undergoing treatment at a designated Covid hospital at Vijayapura.

The three Mysuru cases take the number in that region up to 61. All three are linked to the Jubilant pharma company at Nanjangudu, which accounted for a total of 50 of the 62 cases reported there. This lot of 50 includes a cluster of 27 employees of the company and 23  of their contacts (20 from Nanjangud and 30 from Mysuru).

The five cases from Bengaluru includes one with a history of Severe Acute Respiratory Infection (SARI), a 13-year-old boy who was in contact with a positive patient and health officials are tracing the source of infection of the remaining three cases.

A 59-year-old woman from Gadag who was a contact of an 80 year old female who succumbed to the virus has tested positive on Thursday.

The case from Kalaburgi is a 23-year-old female, she was in contact with a positive patient. She is isolated at designated hospital and treated at Kalburgi.