India   All India  16 Apr 2019  Does it behove Rahul to label all Modis as thieves: PM in Korba
India, All India

Does it behove Rahul to label all Modis as thieves: PM in Korba

Modi also accused the Congress of being 'hand in glove with naxals'. 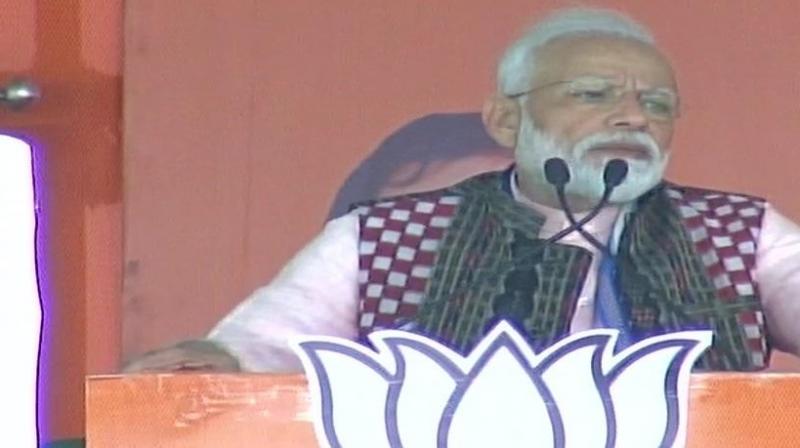 The Congress poll manifesto will give an open license to those who misguide peaceful tribals in forests, Modi said referring to naxals. (Photo: ANI)

Such type of language does not behove the Congress leader, Modi said, addressing a poll rally here in Chhattisgarh.

Modi also accused the Congress of being "hand in glove with not only naxals but also with those who want to to break India".

The Congress poll manifesto will give an open license to those who misguide peaceful tribals in forests, Modi said referring to naxals. The Congress' panja (palm) wants our armed forces to be stripped of their special powers and weaken them, Modi said.

"Will you allow the Congress to compromise on national security," Modi said. The PM exuded confidence that there will be 'Modi Sarkar' once again after Lok Sabha poll results on May 23.

Caste, religion based discrimination only achievement of Cong, BJD: PM in Odisha

Attacking Congress and state-ruling government (BJD), Prime Minister Narendra Modi on Tuesday said the discrimination on the basis of caste and religion are their only achievement.

Addressing a rally here in western Odisha, he said, "Only 15 paise of a rupee would reach the poor during the UPA rule, the rest was swindled by unscrupulous elements."

Modi said that if BJP comes to power, they would set up a fisheries ministry and come up with schemes for welfare of fishermen.

“For 20 years you trusted Odisha's govt blindly but now the people of the state want change. Once we come to power in the state we will implement Ayushman Bharat Yojana,” he said.

"This chowkidar (watchman) has taken concrete steps to ensure that the entire fund flowing from the Centre percolates to the people," he added.

Slamming the BJD government over mining and chitfund scams, the Prime Minister said the Naveen Patnaik-led party is only worried about personal gains.

"How can they (BJD) think of common people when all they do is protect those involved in chitfund and mining scams. It is the Modi government that amended decades-old mining law and ensured that a part of the fund from the resources extracted is utilized for the development of local infrastructure," he claimed.

The Congress and its 'malamilawati' friends desperately want to oust this 'chowkidar because of the BJP's onslaught on corruption, he stated.

"The country was hit by corruption for years since Independence. It is the BJP government that put a brake on these corrupt practices," the PM asserted.

Polling for Sambalpur Lok Sabha seat, where the BJP has fielded Nitesh Ganga Deb, is scheduled to be held in the third phase on April 23.