India   All India  16 Apr 2018  UP man ties wife to fan, beats with belt, sends video to in-laws asking for dowry
India, All India

UP man ties wife to fan, beats with belt, sends video to in-laws asking for dowry

The man told his in-laws that he will further torture their daughter if his demands of dowry are not met. 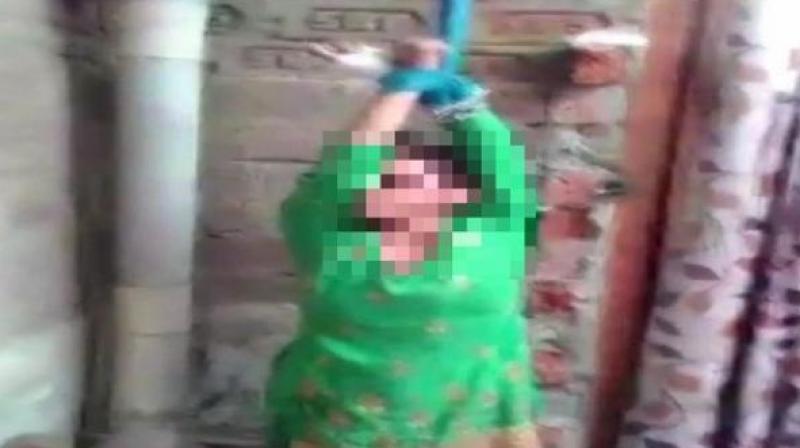 The woman said that her husband beat her with belt till she fell unconscious. (Photo: Twitter | @ANINewsUP)

Shahjahanpur: In yet another shocking incident from Uttar Pradesh, a man tied his wife to the ceiling fan and brutally beat her with a belt and even filmed the entire incident before sending the video to his brother-in-law threatening that he will further torture her if his demands of dowry are not met.

The incident took place at Shahjahanpur district in Uttar Pradesh, where the man wanted his wife to ask for Rs 50,000 from her parents. When she refused to do so, she was tortured and beaten till she fell unconscious.

Talking to news agency ANI, the woman said that her husband beat her with a belt and when she fell unconscious he tied her hands to the ceiling using her dupatta.

"He thrashed me brutally for 3-4 hours after which I fell unconscious. When I re-gained my consciousness, both my hands were tied to the ceiling," said the woman.

The woman further said, "I am not educated and that's why I am in this condition. My life is destroyed."

A case has been registered under relevant sections of Dowry Prohibition Act against the victim's husband and four other people of his family and investigation has been initiated.

While no arrest has been made so far as the accused and his family members are absconding, the police took cognisance of the video and responded. After seeing the video, Sumit Shukla, Circle Officer of Shahjahanpur said, "We saw the viral video in which a man is mercilessly beating his wife. A case has been registered and efforts are on to arrest the accused."