However, father of one of the girls, said, 'We are certain that they were kidnapped, and then raped and murdered.' 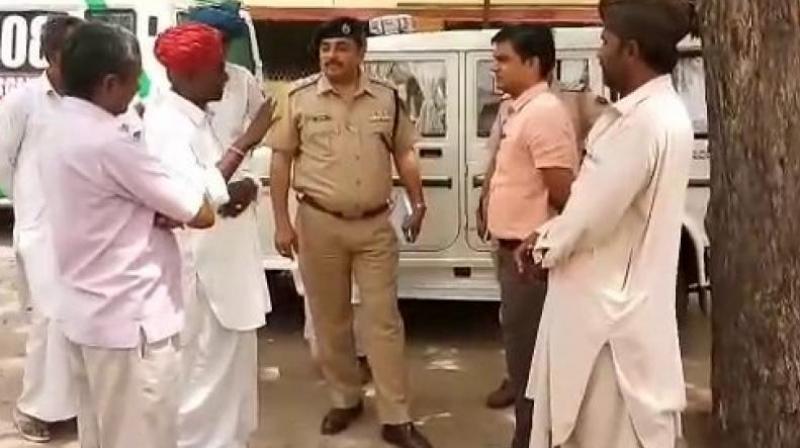 The two girls aged 12 and 13 years were from Dalit families while the boy was a 17-year-old from a minority community. (Photo: ANI/Twitter)

Barmer (Rajasthan): In a shocking incident, bodies of three minors -- two girls and a boy -- were found hanging from a tree in remote Swaroop Ka Tala village in Barmer district of Rajasthan.

The two girls aged 12 and 13 years were from Dalit families while the boy was a 17-year-old from a minority community. All the three teenagers were found hanging from the same tree, about a kilometre outside the village.

According to a report by NDTV, Gagandeep Singla, Superintendent of Police, Barmer said, "Initial information suggests it could be a case of mass suicide as villagers said the two girls were in a relationship with the boy."

A case of unnatural death has been registered, he added.

However, father of one of the girls, who are cousins, Bhairu Meghwal said, “My daughter Shanti (13) and niece Madhu (12) were sleeping with us in our house on Thursday night. We woke up after midnight to find that they were missing; their bodies were found on Friday morning. We are certain that they were kidnapped, and then raped and murdered,” according to a report in The Indian Express.

However, neighbours claimed that mass suicide could have been the result of a relationship that had gone wrong. The villagers alleged that the two girls and boy Deshal Khan were in a relationship for the last one year and were often seen together. The Meghwal community reportedly had called a panchayat meeting over the issue.

According to reports, Deshal’s father also believes that his son has committed suicide. He also added that his son did not stay at home and was usually out of the village, doing odd jobs, whatever he could find to earn his living.

Police have initiated a probe and in the mysterious deaths of three teenagers that have thrown up several unanswered questions.