Sessions court also asks state Crime Branch to give counsel for accused copies of chargesheet and fixed Apr 28 as next date of hearing. 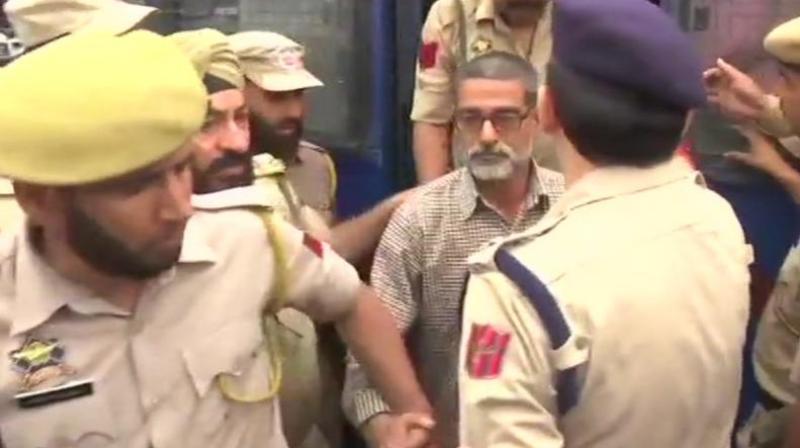 According to the chargesheets filed by the Crime Branch, the murder was part of a carefully planned strategy to remove the nomadic community from Kathua’s Rasana village. (Photo: ANI/Twitter)

Kathua: The eight men accused in the rape and murder of an eight-year-old pleaded not guilty and asked the districts and sessions judge for a narco test as the trial into the case began in Kathua on Monday.

Seven of the eight accused were produced before District and Sessions Judge Sanjay Gupta, who asked the state Crime Branch to give them copies of the chargesheet and fixed April 28 as the next date of hearing.

The eighth accused, a juvenile, moved a bail application before the chief judicial magistrate. The matter was posted for April 26.

The young girl from a minority nomadic community was allegedly held in captivity in a small village temple in Kathua district for a week in January this year during which she was kept sedated and raped before being bludgeoned to death. Her body was found in the forests on January 17.

According to the chargesheets filed by the Crime Branch, the murder was part of a carefully planned strategy to remove the nomadic community from Kathua’s Rasana village.

A separate chargesheet was filed for the juvenile.

The counsel for the accused demanded a copy of the chargesheet filed by the Crime Branch on April 9 before the chief judicial magistrate.

Immediately after the brief hearing in the sessions court, the seven accused were shifted back to the jail under heavy security. Special police officer Deepak Khajuria, who is alleged to have repeatedly raped the child, told reporters from the police van that he was also demanding a narco test, also known as the "truth test", and a CBI probe.

As the trial began inside the court, main accused Sanji Ram's daughter Madhu Sharma protested outside, demanding a CBI probe. There was heavy police presence at the Kathua complex following the tension on April 9 when members of the local bar association did not allow the Crime Branch to submit its chargesheet in the case.

Sanji Ram, the caretaker of the 'devisthan' in a village in Kathua, about 90 km from Jammu, is listed as the main conspirator behind the crime.

He was allegedly joined by special police officers Deepak Khajuria and Surender Verma, friend Parvesh Kumar alias Mannu, Ram's nephew, a juvenile, and his son Vishal Jangotra alias "Shamma". The chargesheet also names investigating officers head constable Tilak Raj and Sub-Inspector Anand Dutta, who allegedly took Rs 4 lakh from Ram and destroyed crucial evidence. The issue of providing the accused copies of the "challan", or the chargesheet, was raised before the judge by the lawyers, Ankush Sharma, who is pleading the case for Sanji Ram, his son and others, told reporters.

He said the chargesheet was presented in court on April 9 but copies had not yet been provided. Ram told the judge that they wanted narco tests and were ready for them. The judge asked the accused whether they had been given copies of the chargesheet, which runs into 400 pages, added AK Sawahney, who is representing head constable Tilak Raj. He told reporters that Jammu and Kashmir Chief Minister Mehbooba Mufti had been talking about a fast track trial but copies of the chargesheet had still not been provided to them.