India   All India  16 Apr 2018  I can be killed and raped: Kathua rape victim's counsel receives threats
India, All India

I can be killed and raped: Kathua rape victim's counsel receives threats

'I don't know how long I will be alive. I can be raped...My modesty can be outraged,' Lawyer Deepika S Rajawat said. 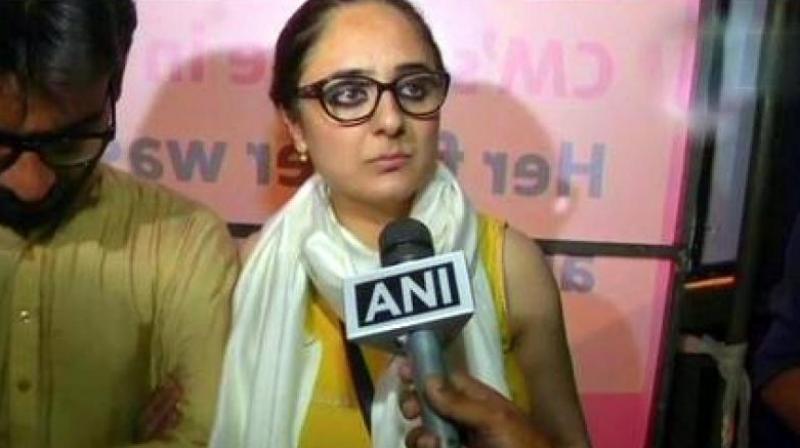 Lawyer Deepika S Rajawat said she will tell the Supreme Court that she is in danger. (Photo: ANI | Twitter)

Srinagar: Amid nation-wide protests against the rape and murder of 8-year-old girl in Jammu and Kashmir’s Kathua, the lawyer of the victim’s family says that she has been receiving threats and said she will approach the Supreme Court requesting protection.

Lawyer Deepika S Rajawat says she fears she can be "raped or killed".

“I don't know how long I will be alive. I can be raped...My modesty can be outraged. I can be killed, I can be damaged. I was threatened yesterday that 'we will not forgive you'. I am going to tell the Supreme Court tomorrow that I am in danger,” Rajawat said on Sunday.

I don't know till when I will be alive. I can be raped, my modesty can be outraged, I can be killed, I can be damaged. I was threatened yesterday that 'we will not forgive you'. I am going to tell SC tomorrow that I am in danger: Deepika S Rajawat, Counsel, Kathua victim's family pic.twitter.com/khXFELUqZe

On Monday, the victim’s father requested the Supreme Court to shift the trial outside Jammu and Kashmir, citing safety and security for his family.

"We don't think there is conducive atmosphere in Kathua for the trial," said Rajawat.

Last week, Rajawat appeared on a television channel and alleged that she was threatened by Jammu Bar Association president BS Slathia from appearing in the case.

“I am not a member of the Jammu Bar Association. But on Wednesday, Slathia asked me to stay away from the case while I was going to the court. I am not answerable to him, I am only answerable to my client,” she told TV channels.

“I am not scared, but I am not feeling safe either. Protesters (lawyers) are trying to put pressure on me so that I don’t fight for justice. But I will continue to fight her case. I have full faith in the police investigation,” Rajawat added.

The trial in the Kathua rape began from Monday.

The incident has left the country shocked and angry and thousands of protesters took to streets voicing their concern over security of girls and women.

Six men, including a retired revenue official, two police officers and a minor have been accused of kidnapping, gangraping and murdering the minor from the nomadic Bakherwal community in Kathua in January this year. Two other policemen have been charged with trying to cover up the crime for money.

The girl's body was found on January 17. After the accused were arrested, a group called the Hindu Ekta Manch took out protests in which two BJP ministers and a lawyers' body linked to the Congress participated.

The case gained national attention after a police chargesheet revealed that the girl was kept in a local temple, gangraped repeatedly, and kept sedated and without food before being strangled. Her head was also smashed with a large rock. Just before she was killed, one of the accused, a police officer, insisted on raping her one last time.

A group of lawyers had tried to present the police from submitting the chargesheet.