The blast at Mecca Masjid in Hyderabad on May 18, 2007 during Friday prayers had claimed 9 lives. 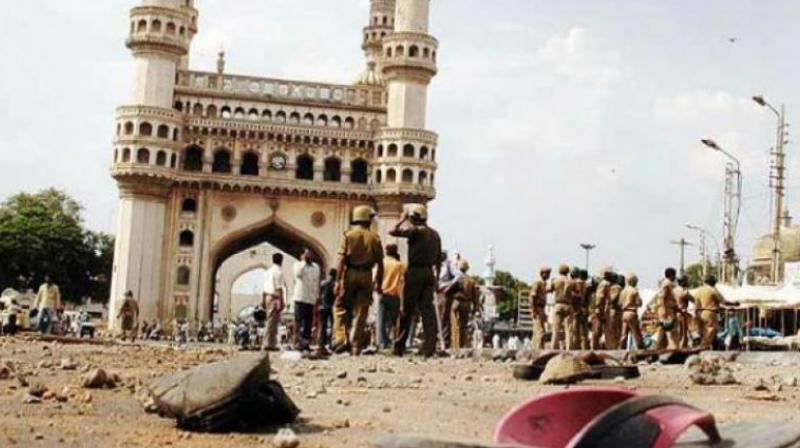 The blast at the historic Mecca Masjid in Hyderabad on May 18, 2007 during Friday prayers had claimed nine lives and left 58 others injured. (Photo: File)

Hyderabad: All the accused in the 2007 Mecca Masjid blast case have been acquitted by a special NIA court in Hyderabad.

The blast at the historic Mecca Masjid in Hyderabad on May 18, 2007 during Friday prayers had claimed nine lives and left 58 others injured.

After initial investigation by the local police, the case was transferred to CBI, which filed a chargesheet.

Subsequently, the National Investigation Agency (NIA) took over the case from the CBI in 2011.

Ten people allegedly belonging to right wing organisations were named as accused in the case.

However, only five of them -- Devendra Gupta, Lokesh Sharma, Swami Aseemanand alias Naba Kumar Sarkar, Bharat Mohanlal Rateshwar alias Bharat Bhai and Rajendra Chowdhary -- who were arrested and faced trial in the case.

Two other accused -- Sandeep V Dange and Ramchandra Kalsangra -- are absconding while another accused Sunil Joshi had died.

A total of 226 witnesses were examined during the trial and as many as 411 documents exhibited.

Swami Aseemanand and Bharat Mohanlal Rateshwar are out on bail while three others have been lodged in the Central prison in Hyderabad under judicial remand.

In March 2017, a court in Rajasthan had sentenced Devendra Gupta and others to life in jail in the Ajmer Dargah blast case.

The state police has sounded high alert in the city ahead of the verdict.

In addition, the Hyderabad, Cyberabad and Rachakonda police have been asked to post pickets in all sensitive areas and public places including bus stations, railway stations and other crowded locations.

Elaborate security arrangements are being made at the Nampally Courts Complex where the NIA special court is located. The anti-sabotage teams inspected the complex on Sunday. Armed personnel from various wings of the State police will be deployed and roads leading to the court will be barricaded.