The urgency is that there are many girls who have to appear in examinations, the senior lawyer told the bench 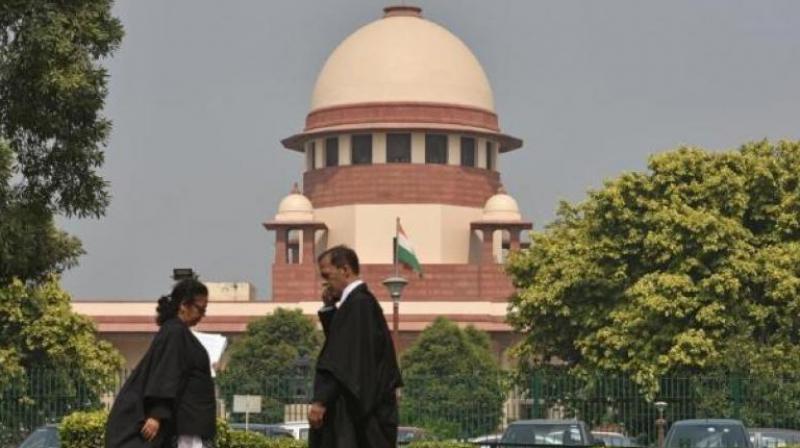 New Delhi: The Supreme Court on Wednesday agreed to list for hearing after Holi vacation the pleas challenging the Karnataka High Court verdict which dismissed the petitions seeking permission to wear hijab inside the classroom saying it is not part of the essential religious practice in Islamic faith.

A bench headed by Chief Justice N V Ramana took note of the submissions of senior advocate Sanjay Hegde, appearing for some students, that urgent hearing was needed keeping in mind the upcoming examinations.

The urgency is that there are many girls who have to appear in examinations, the senior lawyer told the bench which also comprised Justices A S Bopanna and Hima Kohli.

Others also mentioned, let us see...we will list after the vacations. Give us time, the CJI said.

Some petitions have been filed against the full bench high court verdict on the case in which it was held that wearing hijab is not a part of essential religious practice in Islamic faith under Article 25 of the Constitution. The high court dismissed the petitions filed by a section of Muslim students from the Government Pre-University Girls College in Udupi, seeking permission to wear Hijab inside the classroom.

The prescription of school uniform is only a reasonable restriction, constitutionally permissible which the students cannot object to, the high court said. In one of the pleas filed in the top court, the petitioner said the high court has erred in creating a dichotomy of freedom of religion and freedom of conscience wherein the court has inferred that those who follow a religion cannot have the right to conscience.

The plea said the petitioner had approached the high court seeking redressal for the alleged violation of their fundamental rights against the state government order of February 5, 2022 issued under Sections 7 and 133 of the Karnataka Education Act, 1983.

The impugned government order directed the college development committees all over the state of Karnataka to prescribe a student uniform' that mandated the students to wear the official uniform and in absence of any designated uniform the students were mandated to wear an uniform that was in the essence of unity, equality and public order, it said.

The plea said the high court failed to note that the Karnataka Education Act, 1983 and the rules made thereunder do not provide for any mandatory uniform to be worn by students.

The plea claimed that the high court has failed to note that right to wear a Hijab is protected as a part of the right to conscience under Article 25 of the Constitution.

It said since the right to conscience is essentially an individual right, the Essential Religious Practices Test' ought not to have been applied by the high court in the case.

Assuming the Essential Religious Practices Test' does apply, the high court has failed to note that wearing of Hijab or headscarf is a practice that is essential to the practice of Islam, the petition said.

It claimed that the high court has failed to note that Indian legal system explicitly recognises the wearing/carrying of religious symbols.

The plea said Section 129 of the Motor Vehicles Act, 1988, exempts turban wearing Sikhs from wearing a helmet and under the rules made by the Ministry of Civil Aviation, the Sikhs are allowed to carry kirpans onto aircraft.

This public order was passed with an indirect intent of attacking the religious minorities and specifically the followers of Islamic faith by ridiculing the female Muslim students wearing Hijab. This ridiculing attack was under the guise of attaining secularity and equality on the basis of uniform wherein the college development committees prohibited the students wearing Hijab from entering the premises of the educational institutions, it said.

This step-motherly behaviour of government authorities has prevented students from practising their faith which has resulted in an unwanted law and order situation, the plea said.

Meanwhile, a caveat has also been filed in the apex court by another person, who was a party before the high court, seeking to be heard before any order is passed in the matter.

The high court maintained that the government has power to issue impugned order dated February 5, 2022 and no case is made out for its invalidation.

By the said order, the Karnataka government had banned wearing clothes which disturb equality, integrity and public order in schools and colleges, which the Muslim girls had challenged in the high court.

Challenging the February 5 order of the government, the petitioners had argued before the high court that wearing the Islamic headscarf was an innocent practice of faith and an Essential Religious Practice (ERP), and not a mere display of religious jingoism.

The petitioners had also contended that the restriction violated the freedom of expression under Article 19(1)(A) and article 21 dealing with personal liberty.