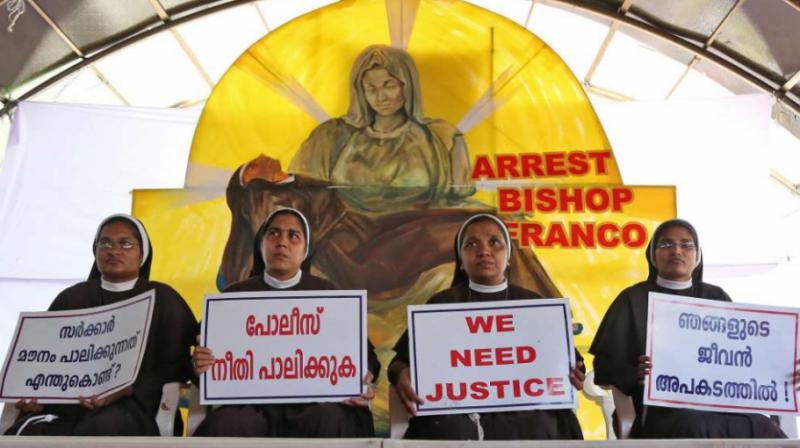 In her complaint to the police in June, 2018, the nun had alleged that she was subjected to sexual abuse by the bishop during the period between 2014 and 2016. (PTI)

Kottayam: A trial court in Kerala  on Monday dismissed a discharge petition filed by Bishop Franco Mulakkal, in connection with the case of alleged rape of a nun in which he is the prime accused.

In his plea filed before the Additional District and Sessions Court I, Mulakkal had claimed that prima facie there was no case to frame charges against him.

Dismissing the plea, the trial court said the bishop should stand for trial in the rape case.

The bishop's lawyer said an appeal would be filed in the High Court against the trial court order.

The prosecution had filed its objection to the plea filed by the bishop, accused of raping and sexually assaulting a nun of the same diocese.

The bishop had filed the plea just ahead of commencement of the preliminary hearing on charges against him in January this year.

The case is based on a complaint filed against the bishop by the nun.

In her complaint to the police in June, 2018, the nun had alleged that she was subjected to sexual abuse by the bishop during the period between 2014 and 2016.

The bishop, who was arrested by the Special Investigation Team which probed the case, has been charged with wrongful confinement, rape, unnatural sex and criminal intimidation.