Foreign and domestic tourists banned from Idukki district in Kerala 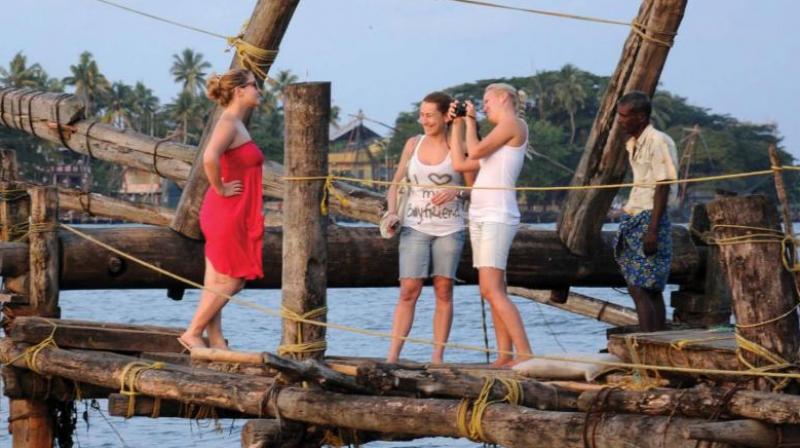 Kochi: As part of stepping up Covid-19 prevention measures, visitors have been banned till March 31 in all tourist spots in Idukki district of Kerala. Authorities informed that even domestic tourists will not be allowed.

As per the estimate, there are 5250 foreign tourists in Kerala now. The state government has instructed hotels, homestays and resorts to provide details of foreign guests staying there. The information should be promptly handed over to the district administrations.

Due to recent developments in the state where many foreign nationals tested positive for coronavirus and few of them caught trying to escape quarantine, foreign tourists have become somewhat of a bad omen to God's own country.

Keralites are reluctant to interact with foreigners and in many places tourists are denied accomodation in hotels, homestays and resorts.

A Spanish couple who took a Munnar bound KSRTC bus from Kottayam was forcefully deboarded as the co-passengers were not willing to travel with them.

As per the instruction of district police chief G Jayadev, the police blocked the bus at Kuravilangad and the tourists have been handed over to health authorities. Though the couple is not symptomatic, the health officials asked them to remain in home quarantine.

Since accommodation facilities were not available, they were shifted to government general hospital, Pala.

In another incident, a foreign tourist had to stay in a church cemetery in Vagamon in Idukki district as resorts and hotels denied room to him, reports Manorama News.

According to reports, the local residents saw the foreigner emerging out of a church cemetery on Sunday morning. He was searching for room till late night on Saturday, and ended up staying in a cemetery.

Though the residents intimated the police, the tourist boarded a bus and left Vagamon before police arrived.

Meanwhile, a French citizen was picked up from Vagamon, and sent to an isolation ward at Idukki Government medical college. Seven Belgian tourists were sent back home after being subjected to screening.

In another unfortunate incident, a French woman and an Italian man had to starve for three days as they couldn’t find lodging facilities anywhere in Kannur.

They reached Kannur on March 11 and had to roam around for accommodation facility. They reached Payyannur when the police and municipal authorities noticed them crying for food.

They were shifted to Payyannur taluk hospital and the duty doctor immediately provided food to the tourists. They were later shifted to Thalassery hospital. Though the duo has no symptoms they are currently kept under observation.