The scheme has recently been implemented by the newly elected Congress governments in Rajasthan and Madhya Pradesh. 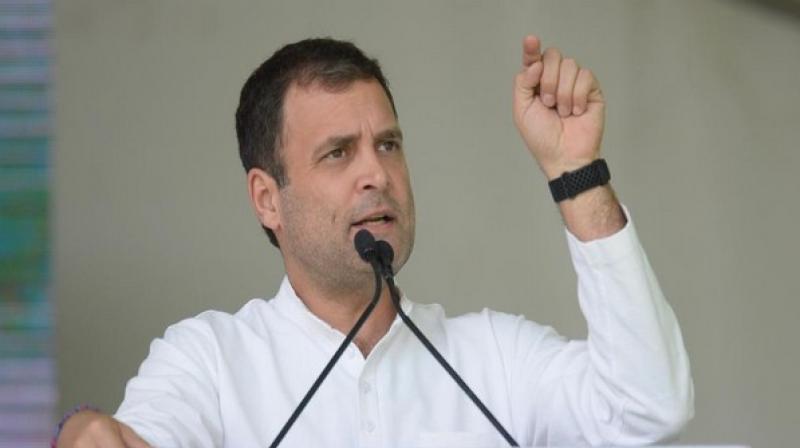 Loan waiver to farmers was a major poll plank which in December last year had ensured Congress’ win in the Assembly elections of three key states of Madhya Pradesh, Rajasthan and Chhattisgarh. (Photo: ANI)

New Delhi: Mindful of the agrarian distress prevailing in the country, the Congress promises to give loan waiver to farmers if it is voted to power. In its yet to be released manifesto for 2019 Lok Sabha elections, details of which have been accessed by this newspaper, the party plans to offer ‘Kisan Shakti’, a loan waiver scheme for farmers.

Another major poll promise will be unemployment allowance for jobless youth under its Nyunatam Aay Yojana (NYAY) or the minimum income guarantee scheme, which has been envisaged by Congress president Rahul Gandhi.

Loan waiver to farmers was a major poll plank which in December last year had ensured Congress’ win in the Assembly elections of three key states of Madhya Pradesh, Rajasthan and Chhattisgarh.

Party sources said that by successfully tapping the mood among the farmers, who have been reeling under farm distress owing to lack of required price for their produce, had helped Congress unseat the BJP from the three important Hindi speaking states.

Therefore the party’s 2019 Lok Sabha election manifesto, which is under preparation and likely to be released soon, will mainly focus on sops for farmers and various measures for the agriculture sector.

Under Nyay (a name coined by party general secretary Priyanka Gandhi Vadra for the minimum income guarantee scheme, as reported exclusively by this newspaper on March 13), a minimum income will be guaranteed in bank accounts of jobless youths.

The scheme has recently been implemented by the newly elected Congress governments in Rajasthan and Madhya Pradesh.

A senior party functionary claimed that the contours of Nyay have been finalised and will be announced in the manifesto. Apart from the agriculture crisis and lack of jobs, the issue of providing accomodation to poor is another key promise which the party plans to make to the electorate.

Congress has consistently claimed that the Narendra Modi government implemented the Goods and Services Tax (GST) regime in haste due to which there is no uniformity in the nation’s tax structure, as in many states taxes vary on similar products.

It plans to counter the NDA’s slogan of ‘one nation one tax’ with its own motto of ‘one tax one rate’, which promises to ensure uniformity in taxes on similar products across the country under GST, if voted to power.

In addition to this, the Congress also promises to ensure 33 per cent reservation for women across various spectrum under the initiative titled ‘Aadhi Aabadi Poora Haq’.

On March 13 while interacting with students of Stella Maris College in Chennai, party president Rahul Gandhi had promised 33 per cent reservation for women in all government jobs if the Congress comes to power after the Lok Sabha elections.

He made two two promises during that interaction, passage of the much-awaited women’s reservation bill and the 33 per cent quota in government jobs.

“I don’t see enough women in leading positions. The attitude towards women needs to change. Women should be pushed into leadership roles. I think, generally, women are smarter than men. That’s where I come from,” he had told students.