After Hindi belt losses, Shah keen to get back to winning mode in Odisha

Apart from eyeing a victory in Assembly elections, BJP is looking to improve its LS tally from the lone seat it won out of 21 in 2014 2014. 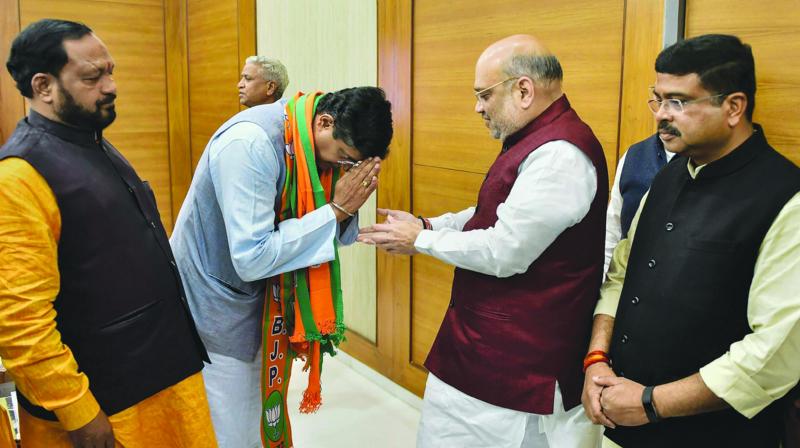 Bhubaneswar: Facing questions after the BJP's debacles in Chhattisgarh, Rajasthan and Madhya Pradesh Assembly polls, party president Amit Shah seems to be making a serious bid to get back to winning ways by wresting power from the BJD in the forthcoming Odisha Assembly polls that will be held simultaneously with Lok Sabha elections in four phases spanning from April 11 to 29.

Widely credited with the saffron surge in most of the provinces of the country, Mr Shah has set a target of 120 out of the 147 Assembly seats in the state, a key province that has always remained a challenge for the BJP.

Until recently struggling to nail the ruling BJD, the BJP has reached out to some of top and staunch opponents of the CM. It has struck deals with veterans like Bijoy Mohapatra, Brajakishore Tripathy, Dillip Ray, Kharavela Swain and Dr Damodar Rout to deal the "final blow" to the BJD in order to end its 20 years of rule in the state.

Bijoy Mohapatra, Dilip Ray and Brajakishore Tripathy are founder members of the BJD. After being unceremoniously expelled by Mr Patnaik, these leaders had joined the BJP, but later they distanced themselves from the saffron party.

Sources said the BJP supremo Mr Shah felt that though the party had gathered strength under the leadership of Union minister Dharmendra Pradhan in the past few years, it still required more firepower to dislodged the BJD from power.

As part of his strategy, Mr Shah recently wooed to his side Naveen Patnaik's staunch opponent and former BJD leader Baijayant Jay Panda and made him the national vice-president of the party.

After Mr Panda's entry into BJP, more than half a dozen strong BJD leaders planned to switch sides to fight elections on Lotus symbol.

BJP in-charge for Odisha, Arun Singh, appears quite aggressive in execution of Mr Shah's strategies to realise the party's dream to grab power in the state.

After strengthening the organisation at booth levels, Mr Singh has fanned out active cadres of the party to the nook and corner of the state, asking them to find out disgruntled BJD leaders planning to contest elections as independent rebels if not given ticket to contest for the Lok Sabha and Assembly polls.

The party has already wooed Babu Singh, a prominent youth BJD leader in Bhubaneswar, who despite his 20 years to service to BJD apprehended of not getting a party ticket to contest from Ekamra Assembly seat.

Sources said the BJP has identified potential rebels in almost two-thirds of Assembly constituencies and provide the necessary support as part of election strategy to shatter the CM's dream to have a consecutive fifth term in power.

Mr Shah, sources informed, has instructed Arun Singh and Dharmendra Pradhan and Jual Oram to ensure that potential leaders of the party, unlike previous years, do not fall victims to Mr Patnaik's pet strategy - poaching. In 2014, the BJD had poached Congress stalwart and the then Leader of the Opposition Bhupinder Singh and former BJP leader state president Bimbadhar Kuanr.

Amidst speculation that Prime Minister Narendra Modi might contest from Puri Lok Sabha seat in Odisha, the BJP workers in the state are working overtime to see that the party performs well in both the Lok Sabha and Assembly polls.

The BJP, which jumped from 18 per cent votes in 2014 Assembly elections to finish third next to the Congress left the latter far behind in the 2017 polls by securing 33 per cent votes to reach the second spot. What has inspired the BJP to dream power in the state is the fall of BJD vote share in the rural polls to 42 per cent from 44 per cent in 2014 polls.

"The results of the rural polls held in 2017 clearly prove that the BJD is losing confidence of the people and Odisha is increasingly tilting towards BJP. The efforts of Narendra Modi are being widely appreciated by Odisha people and they would overthrow the ruling BJD government this time around," said BJP in-charge Arun Singh, adding the regional party will be completely wiped out from the state's political map soon.

Apart from eyeing a victory in the Assembly elections, the BJP which won only one of the 21 Lok Sabha seats in the 2014, is working hard to increase its tally to at least 12 seats.