India   All India  16 Feb 2019  'Vande Bharat Express' breaks down, day after it was flagged off by PM
India, All India

'Vande Bharat Express' breaks down, day after it was flagged off by PM

The incident occurred around 15 kilometers away from Tundla junction in UP. The stranded passengers were shifted to a different train. 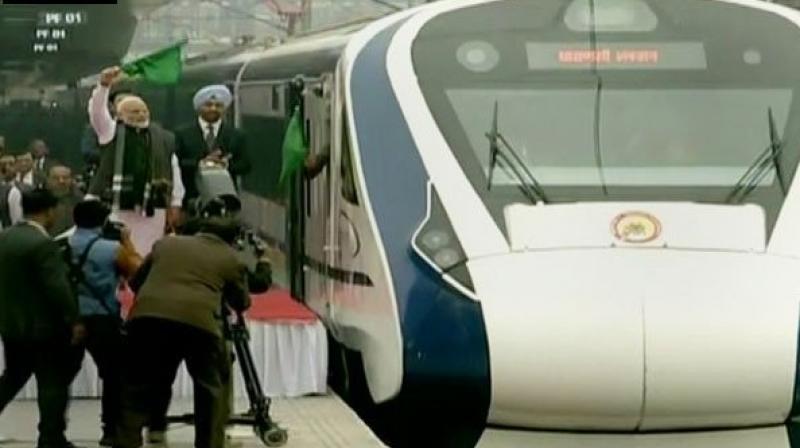 According to officials, the train broke down because of 'skidding wheels' and the case is being looked into by engineers. (Photo: ANI)

New Delhi: Vande Bharat Express, India's fastest train broke down on Saturday morning, a day after it was flagged off by Prime Minister Narendra Modi.

The incident occurred around 15 kilometers away from Tundla junction in Uttar Pradesh. The train was coming back from Varanasi to get ready for its first commercial run scheduled to start from Sunday.

Vande Bharat Express or Train 18 resumed its journey at around 8.15 am, after being at a halt for almost three hours, Railways said.

According to officials, the train broke down because of "skidding wheels" and the case is being looked into by engineers.

"It was a case of skidding wheels after the train ran over a cattle. Engineers are looking into it," Northern Railway CPRO Deepak Kumar said.

The passengers on board, including railway officials and journalists, were shifted to a different train.

Vande Bharat Express became India's fastest train by hitting speeds of over 180 kmph during a trial run on a section of the Delhi-Mumbai Rajdhani route.

The engineless train, formerly known as Train 18, was launched by Railway Minister Piyush Goyal commenced its inaugural from the New Delhi railway station at 11.19 am on Friday for a journey to Varanasi.

It had hit a top speed of 130 km per hour in its first journey. The train reduces travel time on the New Delhi-Varanasi route to eight hours compared to the average 13-14 hours. The Vande Bharat Express has been manufactured by the Integral Coach Factory, Chennai.