Sources said the Chinese refusal so far to back India’s move to get JeM chief Masood Azhar banned by the UN is also being raised with Beijing. 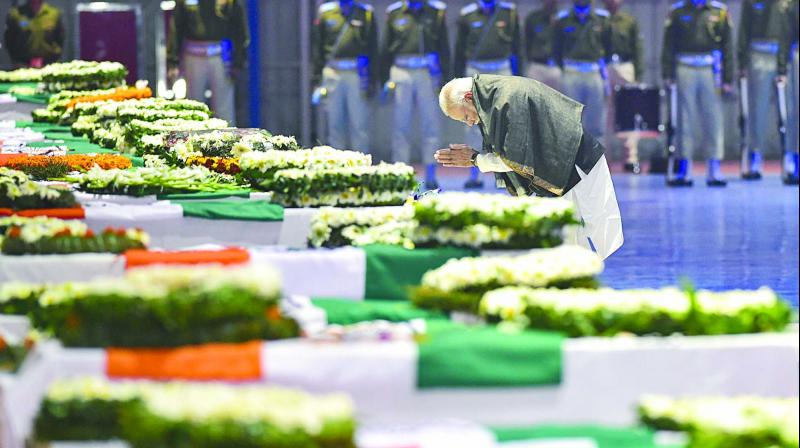 New Delhi: Talking tough and putting Islamabad on notice in the aftermath of Thursday’s horrific terror attack on CRPF jawans at Pulwama in the Kashmir valley, a furious Prime Minister Narendra Modi on Friday said Pakistan’s plans of destablising India would not materialise, adding that those behind the attack would have to pay a “very heavy price”. The Prime Minister acknowledged that “the blood of the people is boiling” and assured that the security forces have been given complete freedom to give a “fitting, jaw-breaking response”.

The Modi government also swiftly withdrew the “most-favoured nation” (MFN) status to Pakistan and announced that the ministry of external affairs (MEA) would initiate all diplomatic steps to ensure complete “isolation of Pakistan” in the international community.

The government has convened an all party meeting on Saturday to discuss the Pulwama attack. Reports from Jammu and Kashmir said that 12 suspects have been detained in Avantipura and Pulwama towns in connection with the state’s worst terror strike. Official sources in the Valley on Friday said the toll in the attack has risen to 49. A National Investigation Agency (NIA) team, along with explosives and forensic experts, collected materials required for a forensic evaluation of the scene of crime.

India also called in its high commissioner to Pakistan Ajay Bisaria to New Delhi for “consultations”.

Sources said the Chinese refusal so far to back India’s move to get JeM chief Masood Azhar banned by the UN is also being raised with Beijing.

Earlier, speaking at a function to flag off the Vande Bharat Express, India’s fastest train from Delhi to Varanasi, an enraged PM Modi said, “I want to tell the terror outfits and those aiding and abetting them that they have made a big mistake. They will have to pay a very heavy price for their actions. Let me assure the nation that those behind this attack, the perpetrators of this attack will be punished. We will give a fitting, jaw-breaking response to this attack.”

He added, “Security forces have been given complete freedom, the blood of the people is boiling... Our neighbouring country, which has been isolated internationally is in a state of illusion, thinks such terror attacks can destabilise us, but their plans will not materialise.”

“My condolences to families of those martyred in Pulwama attack, those behind the terror strike will pay a very heavy price. I am thankful to all nations which condemned Pulwama attack and urge them to come together to crush terrorism. The forces behind this act of terrorism and those responsible for it, will definitely be punished,” Mr Modi said.

The Prime Minister has cancelled his two-day visit to Madhya Pradesh, scheduled to commence on Friday, during which he was supposed to blow the bugle for the forthcoming Lok Sabha elections.

Backing the government in this crucial hour, Congress president Rahul Gandhi said, “This is a terrible attack, this type of violence is disgusting. Terrorism tries to divide the nation, we can’t be divided by any power. The entire Opposition is with the security forces and the government.”

On Thursday, an explosives laden truck had rammed into a CRPF convoy in Pulwama outside Srinagar, killing CRPF personnel and some locals. One of the bodies was recovered 80 metres from the explosion site. Making it clear that India meant business, the Cabinet Committee on Security (CCS), which met in New Delhi on Friday morning, decided to withdraw the MFN status to Pakistan. “The MFN status to Pakistan stands revoked,” said finance minister Arun Jaitley said after the CCS meeting at the Prime Minister’s residence.

The withdrawal of the MFN status, granted in 1996, would enable India to increase customs duty on goods coming from the neighbouring country. The foreign secretary also rejected the statement made by Pakistan in which it rejected allegations of any link to the Pulwama attack.