Crores for Ambani, Mallya, but Rs 3.50 a day to farmers: Rahul slams Centre

Rahul promised that if Cong voted to power after 2019 polls, a minimum income guarantee would be given to poor. 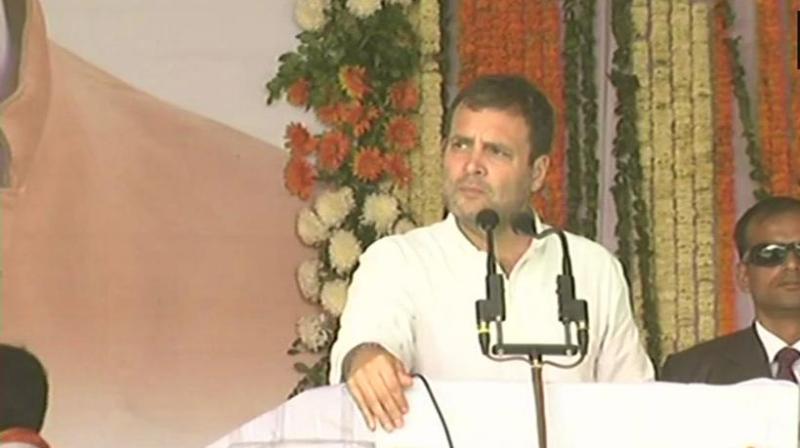 Gandhi was speaking at a convention of tribals here in Chhattisgarh. (Photo: ANI |Twitter)

Jagdalpur: Congress president Rahul Gandhi on Saturday hit out at the Modi government, saying that while it doled out crores of rupees to industrialists such as Anil Ambani and Vijay Mallya, it promised just Rs 3.50 per day to farmers.

Gandhi was speaking at a convention of tribals here in Chhattisgarh.

"Lakhs and crores of rupees have been given to the people like Anil Ambani, Nirav Modi, Mehul Choksi, Vijay Mallya and Lalit Modi, but farmers will get just Rs 3.50 per day," he said, referring to the Centre's Pradhan Mantri Kisan Samman Nidhi Scheme, under which farmers cultivating up to two hectares (five acres) will get direct cash support of Rs 6000 annually. "When the announcement of Rs 6,000 for farmers was made in the Union Budget, BJP MPs were thumping their desks in Lok Sabha," Gandhi said.

"Is this a joke?" he asked. He promised that if the Congress was voted to power after the 2019 Lok Sabha polls, a minimum income guarantee would be given to the poor and the money would be deposited directly into their bank accounts.

"The poll promises (made by Modi) regarding transfer of Rs 15 lakh into everyone's bank account and providing two crore jobs have not been implemented," he said.