Nirav left India on Jan. 1, his wife and business partner Choksi flew out on January 6. 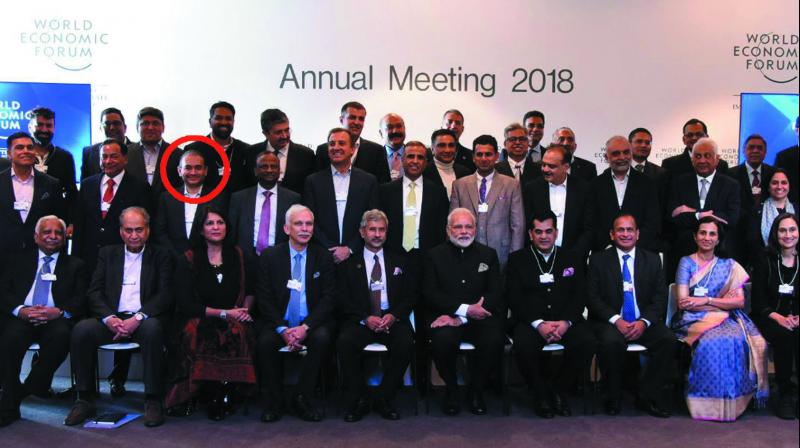 Nirav Modi (in red circle) and PM Narendra Modi along with the Indian business delegation at Davos in January.

New Delhi: As billionaire jeweller Nirav Modi came under the lens following a fraud of Rs 11,400 crore with PNB, a political slugfest between the ruling BJP and Congress broke out on Thursday while the ED carried out simultaneous raids on the diamond king’s offices, showrooms and diamond workshops in Mumbai, Surat (Gujarat) and New Delhi and seized Rs 5,100 crore worth gold and diamond jewellery.

The BJP seethed as the Congress not only described the fraudster  “Chhota Modi number 2” but also released a group photograph of Nirav Modi with the Prime Minister Narendra Modi and other business honchos during last month’s Davos meet.

Congress president Rahul Gandhi, in a tweet, said, “Guide to looting India by Nirav Modi — 1. Hug PM Modi 2. Be seen with him in DAVOS. Use that clout to: A. Steal 12,000 crore B. Slip out of the country like Mallya, while the government looks the other way.”

Union minister Ravi Shankar Prasad, fielded by the saffron camp to counter the Congress, said, “What is this word ‘Chhota Modi’? BJP takes strong offence to the kind of language being used by describing someone like that. It is derogatory, scandalous and demeaning.”

On the photograph controversy, Mr Prasad claimed that it was only a “photo opportunity.”

“Nirav Modi was not part of the Prime Minister Modi’s delegation at the World Economic Forum in Davos. He was part of the CII delegation,” he asserted.

Mr Prasad claimed that the government will not “spare” anyone “who has sought to derail ordinary banking system” and said that Nirav Modi’s passport has been revoked and a look out circular (LOC) issued against him.

The ED launched multiple raids on Nirav Modi’s properties across the country and seized Rs 5,100 crore worth gold and diamond jewellery. It also froze his bank accounts with a balance of Rs 3.9 crore.

The raids came after the agency filed a Rs 280-crore money laundering case against Nirav Modi, his wife Ami, brother Nishal and business partner Mehul Choksi on Wednesday, following a complaint by PNB.

In Gujarat, six diamond workshops were raided in Surat SEZ at Sachin town and an office in Belgium Towers on Ring Road, the hub of diamond jewellery trade. The ED also raided two diamond jewellery boutiques of the diamond tycoon in New Delhi – in Chanakyapuri and Defence Colony.

As the Opposition blamed the government for allowing Nirav Modi to “escape”, the CBI claimed that he left the country on January 1, much before the first complaint against him reached the agency. The probe agency said that it had sought revocation of the passports of Nirav Modi and his business partner Mehul Choksi.

The CBI has booked Nirav Modi, his brother, wife and a business partner for allegedly cheating PNB of over `280.70 crore in 2017.

A week ago, the CBI had raided the residence of Nirav Modi, his brother Nishal, wife Ami and his partners,  including Mr Choksi, and found that the fraud was much bigger that `280.70 crore.

While the fraud was being described as a “mother of banking scams” by the Opposition parties, PNB chairman and managing director Sunil Mehta said, “We have requested him (Nirav Modi) to come and give us a written plan and how he is going to make a repayment.”

At the same time, he said that the bank will take all possible action against the wrong doers in the `11,400 crore fraud case.

Mr Mehta claimed that the bank “will honour all its bonafide commitments” and it wants “to convey to the stakeholders that PNB is pursuing clean banking agenda as a responsible bank”.

Dubbing Nirav Modi “Chhota Modi two” and Lalit Modi “Chhota Modi one”, Congress communications in-charge Randeep Surjewala asked if the billionaire jewellery designer had a tip-off that prompted him to leave the country.

“The entire system was bypassed. All regulatory mechanisms broke down. Everything escaped the eyes of auditors and investigators,” he said.

“Risk management” and fraud detection ability came to a naught. Yet, the Modi government would have us believe that this entire fraud was being perpetrated by two employees… Has it become the norm for letting people run away with public money? Who is responsible?” asked the Congress spokesperson.

The Congress alleged that in July 2016 a private complaint along with proofs against Nirav Modi was sent to the PMO but no action was taken.