According to initial reposts, over 1.91 lakh people were inoculated with Covaxin and Covishield vaccines at 3,351 session sites on Day 1 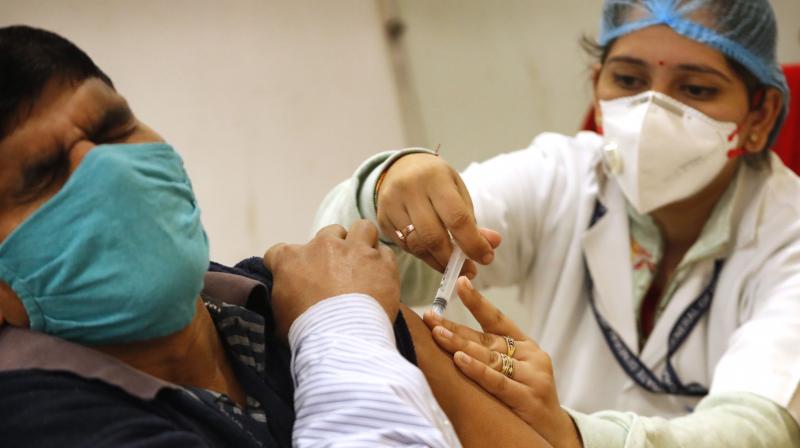 A health worker administers a COVID-19 vaccine to a person at a Hospital in New Delhi, India, Saturday, Jan. 16, 2021. India started inoculating health workers Saturday in what is likely the world's largest COVID-19 vaccination campaign, joining the ranks of wealthier nations where the effort is already well underway. (AP)

New Delhi: India on Saturday launched the world’s biggest vaccination drive in which about three crore healthcare and frontline workers, including security forces, will be the first to get vaccinated against the deadly Covid-19 virus which has infected over 1.05 crore people and claimed 1.52 lakh lives in nine months.

According to initial reposts, over 1.91 lakh people were inoculated with Covaxin and Covishield vaccines at 3,351 session sites across India on Day 1.

Frontline workers, including sanitation workers, doctors and Serum Institute’s CEO, Adar Poonawalla, were among the first people to get injected with the vaccine. The Union health ministry said there were no cases of post-vaccination hospitalisation so far but reports said that in Maharashtra, where 14,000 people received the first dose of the vaccine, 14 people reported adverse effects. Officials and doctors are currently studying the cases and it is not known which vaccine they received.

Out of the two vaccines approved for restricted emergency use — Serum Institute’s Covishield and Bharat Biotech’s Covaxin — apprehensions have been expressed for the latter, as it is yet to complete its late-stage human trials and no efficacy data has been made public.

Launching the world’s biggest vaccination drive against novel coronavirus, Prime Minister Narendra Modi said on Saturday that the vaccination campaign of this scale is unprecedented in the history of mankind while Union health minister termed it the “beginning of the end of COVID-19”.

“World hasn’t seen a vaccination drive of this level ever,” Mr Modi said. He added that in the first round three crore people, which is more than the population of at least 100 countries of the world, are being vaccinated and this needs to be taken up to 30 crore in the second round when elderly and people with serious comorbidities will be vaccinated. He said that there are only three countries — India, USA and China — who have the population of more than 30 crore. “This scale of vaccination campaign has never been attempted in history and this shows India’s capability,” PM said.

Life had come to a standstill about 10 months ago for the entire country, and indeed the world, since the first case of the novel coronavirus was detected in India last year and the vaccines are seen as the only way to reclaim human life and halt the menacing progress of the virus.

Union home minister Amit Shah said the vaccine drive represents the determination of a self-reliant India and is an important milestone in the fight against the pandemic.

Expressing gratitude to frontline Corona warriors, PM said they are getting priority as those “who need the vaccine the most will get it first.” The Prime Minister recalled with sensitivity and empathy, the initial feeling of helpless confusion among the people of the country when people could not attend to their near ones who got infected.

“This disease rendered the infected isolated and alone, when sick children were separated from their mothers and old parents were forced to battle the disease all alone in hospitals. Even the departed relatives who lost the fight could not be given proper send off. Such a memory saddens us even today… The frontline warriors brought hope in an environment of despondency and fear, and today, by vaccinating them first, the country is acknowledging their contribution with gratitude,” said a visibly emotional PM. He said India is guided by a human-centric approach in its vaccination campaign and cautioned people to keep their guard up and follow vaccine protocol.

Expressing “tremendous relief, Union health minister Dr Harsh Vardhan said, “We have won the battles against polio and smallpox. Now we have reached the decisive phase of winning the war against coronavirus. This is the beginning of the end of Covid. Vaccine will be remembered like a Sanjeevani for clinching the victory over Covid.”

In Delhi’s AIIMS, sanitation worker Manish Kumar was the first to be administered the vaccine in the presence of Dr Harsh Vardhan and senior officials. AIIMS director Dr Randeep Guleria and NitiAayog member (health) Dr V.K. Paul were also given shots of Bharat Biotech made Covaxin.

SII’s Adar Poonawala posted his video of taking the Oxford- AstraZeneca-SII vaccine Covishield. “It brings me great pride that Covishield is part of this historic effort and to endorse it's safety and efficacy, I join our health workers in taking the vaccine myself,” Mr Poonawala said.

However, fear and apprehension prevailed over the vaccines that are yet to prove their efficacy.

Manish Kumar, the first person in Delhi to get the vaccine shot, said: “Many of them (staff members) were scared. So, I went to my seniors and said I should be given the vaccine first. I wanted to prove to my colleagues that there is no need to be scared… My wife even asked me not to take the vaccine. I told her it is just an injection. After taking the dose, I asked my mother to tell my wife that I am safe.”