Bihu failed to pacify the ongoing agitation and protest against the citizenship amendment bill. 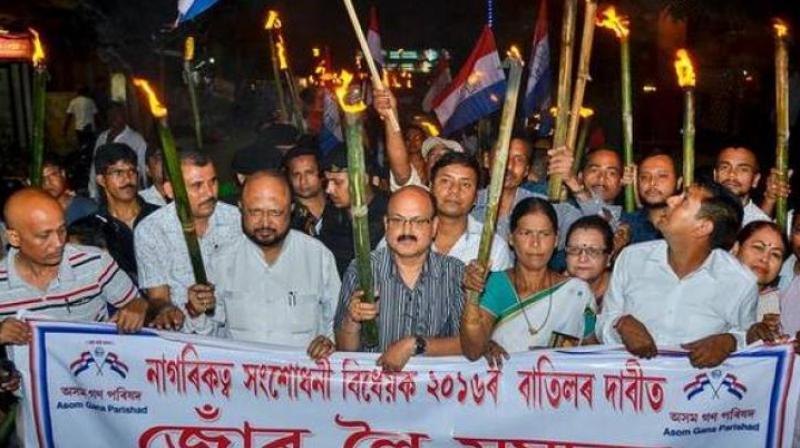 The members of the Krishak Mukti Sangram Samiti (KMSS), which is spearheading the agitation along with 70 other organisations, observed a 24-hour hunger strike to register their dissent. (Representational image)

Guwahati: The festivities of Bihu failed to pacify the ongoing agitation and protest against the citizenship amendment bill as several indigenous organisations and political leaders continued their agitation during the festival by urging the people to keep the celebrations subdued.

It is significant that Magh Bihu marks the end of the harvesting season in the month of Maagha. The three-day festival is celebrated with lavish feasts and bonfires.

The members of the Krishak Mukti Sangram Samiti (KMSS), which is spearheading the agitation along with 70 other organisations, observed a 24-hour hunger strike to register their dissent. KMSS chief Akhil Gogoi said that the protesters skipped the celebrations this year and he was on fasting. Forum Against Citizenship Act Amendment Bill (FACAAB) president Hiren Gohain, along with its convenor Manjit Mahanta, also burnt copies of the Citizenship Amendment Act, 1955 and Citizenship (Amendment) Bill, 2016 in the fire of the traditional “meji” (structures made of hay).

“We have to protect our traditions, but at the same time, we have to continue with our protests against the anti-constitutional bill,” they said in a statement. Former chief minister Tarun Gogoi while participating in a Magh Bihu rituals called for an united opposition against the bill.

Assamese singer Zubeen Garg  not only threatened to launch an agitation if the Citizenship (Amendment) bill was not withdrawn but in a social on the Facebook also asked the BJP—- “Can I get the votes back that you earned using my voice in 2016?” Mr Garg had composed the official campaign song of the BJP in Assam — Sokolure Ananda Sarbananda (Sarbananda, everyone’s happiness).

Many other singers like Angaraag Mahanta (better known as Papon) as well as Bipin Chowdang, Neel Akash, Kusum Kailash and filmmakers like Rima Das have joined the protest.