Modi said the previous government allotted Rs 500 crores for OROP even after knowing that this number was not the accurate figure. 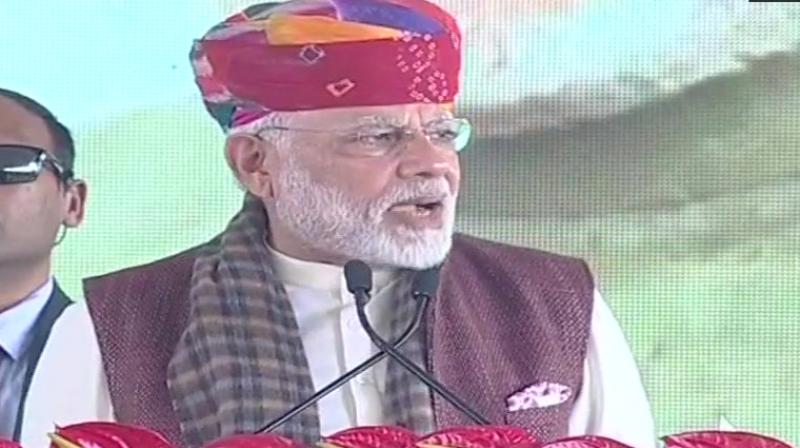 Modi said when BJP assumed office, one of the first things it did was to see what work has been done on the promises in the Railway Budget. (Photo: ANI | Twitter)

Barmer (Rajasthan): Prime Minister Narendra Modi on Tuesday said the Congress Party and drought are 'twin brothers' as wherever the party goes, there is drought.

Speaking at a function organised to start work on the Rs 43,129 crore Barmer oil refinery project in Barmer, Modi said drought and Congress walk hand-in-hand and the state saw end of drought when the party was shown the door.

Touching on the slugfest between ruling BJP and Congress over credit for the refinery, he said the Congress had only laid foundation stones for projects across the country to claim credit.

Railway lines were announced just to claim short term popularity with projects never ever seeing the light, he said.

Congress, he said, had "hoodwinked" people by making just announcements.

Modi said the Congress had seen his commitment to one- rank-one-pension scheme for defence personnel and provided for Rs 500 crore in the interim budget just before the 2014 general elections to claim credit.

"Barmer refinery was at least on papers, OROP wasn't even on paper," he said, adding that no ground work on the beneficiaries or on the outgo was ever done. It took one-and-half-years to collate the list of beneficiaries of OROP and the implementation cost Rs 12,000 crore as against Rs 500 crore provided by the Congress, he said.

Of this, four instalments totalling Rs 10,700 crore have already been made to defence personnel and the rest would also be paid soon, he said.

He said while the Congress just gave the slogan of 'garibi hatao' (remove poverty), the BJP government has worked towards doing so by way of providing free cooking gas (LPG) connection to poor women and giving free power connection to the four crore households that still do not have electricity.

Ahead of the event, ruling BJP and opposition Congress slugged it out to get credit for the refinery.

But both Oil Minister Dharmendra Pradhan and Chief Minister Vasundhra Raje said that foundation laying was a political stunt done days before the model code of conduct for assembly elections came into force on September 27, 2013.

Neither the land was acquired for the project nor the environment clearance obtained for the foundation laying, they said.

Tuesday's function came weeks before by-polls for Alwar and Ajmer Lok Sabha, and Mandalgarh Assembly seats in Rajasthan on January 29. The state goes to polls later this year.