The SC sources said the Chief Justice met the four judges for about 15 minutes before starting the normal work of the day. 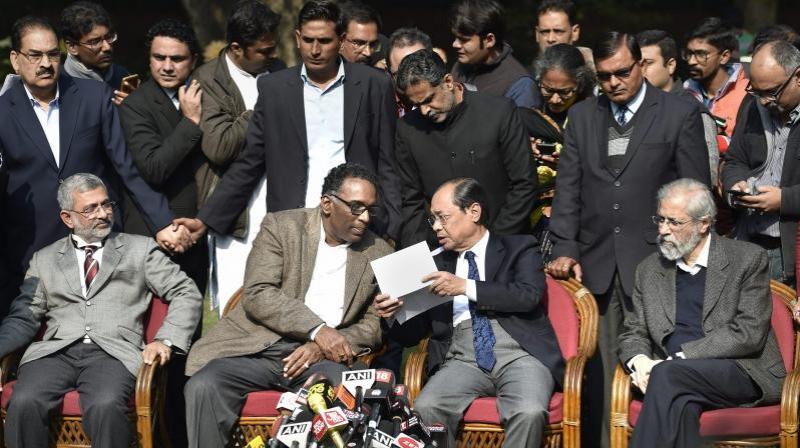 At a press conference last week, the four judges had flagged certain problems, including the assigning of cases by the CJI. (Photo: PTI)

New Delhi: In a bid to resolve their differences, Chief Justice of India Dipak Misra met the four senior most judges of the Supreme Court who had hurled several accusations against him including on the issue of allocation of PILs of sensitive nature.

The apex court sources said the Chief Justice met the four judges --Justices J Chelameswar, Ranjan Gogoi, M B Lokur and Kurian Joseph -- for about 15 minutes before starting the normal work of the day.

Some other judges were also present in the meeting, the sources said.

After the meeting, the CJI and the four judges went ahead with their listed business.

Despite optimism expressed on Monday by legal bodies, the crisis in the Supreme Court over complaints against the chief justice seemed far from over.

At a press conference last week, the four judges had flagged certain problems, including the assigning of cases by the CJI, and said there were certain issues afflicting the country's highest court.

Earlier in the day, Attorney General K K Venugopal told PTI "I think it (crisis) has not been settled. Lets hope things will be fully settled within 2-3 days."

Supreme Court Bar Association (SCBA) President Vikas Singh also exuded confidence that there was a likelihood of the crisis being resolved by the end of this week.

On Sunday, Venugopal and Bar Council of India Chairman Manan Kumar Mishra had said the crisis has ended and there is no dispute now.