The Alanaganallur villagers took the strong police presence of thousands of cops by surprise when the bulls were let into the open ground. 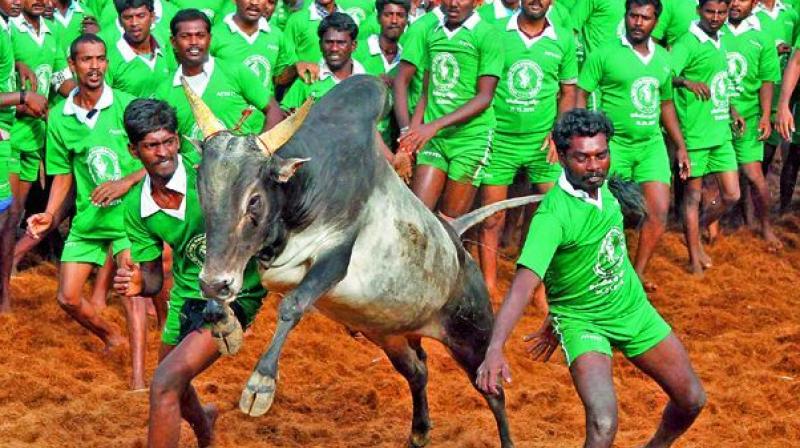 Madurai: Impromptu Jallikattu events were held at 14 venues in and around Madurai on Mattu Pongal day in which nearly 100 bulls participated. In Palamedu near Madurai, which is one of the main centres of jallikattu, police thwarted the attempts of locals on Sunday to hold the event provoking widespread anger among the youth.

In Alanaganallur, the most famous of jallikattu venues, saw three bulls let into the field located on the backside of Vadivasal engaging youths for 20 minutes in the event which ended with police arresting two persons. In all, police took action against 40 people in Madurai district.

The Alanaganallur villagers took the strong police presence of thousands of cops by surprise when the bulls were let into the open ground.

The police were focusing on the traditional Vadivasal (the entry point of bulls into the arena) when the villagers used the ground at the rear to let the bulls loose. Policemen in mufti had been deployed for each of the bulls in Alanganallur to prevent the villagers from mobilising a jallikattu. But members of Tamil Nadu Kongu Ilaingar Peravai had secretly moved 7 bulls into the village tank and stayed awake the entire night to ensure jallikattu was held.

“Around 4 am, we erected a makeshift Vadivasal and brought the bulls of the famous Pullakulam cattle breed for the event,” said Arunkumar, a bull tamer from Muduvarpatti village. Around 100 youths had gathered at the venue and were just about attempting to tame the bulls, but the event ended abruptly as police surrounded them.

However, none could lay their hands on the `Ayyur Kari’ bull, which stood majestically in the middle of the arena, scraping up sand with his hooves and looking sharply towards the tamers. “Kari had won all his jallikattu events in Alanganallur and Palamedu since 2010,” said the tamers. Similarly, members of TN Jallikattu Youth Federation, conducted an event with 20 bulls inside the Alangulam tank at Mudukkathan village for more than an hour.