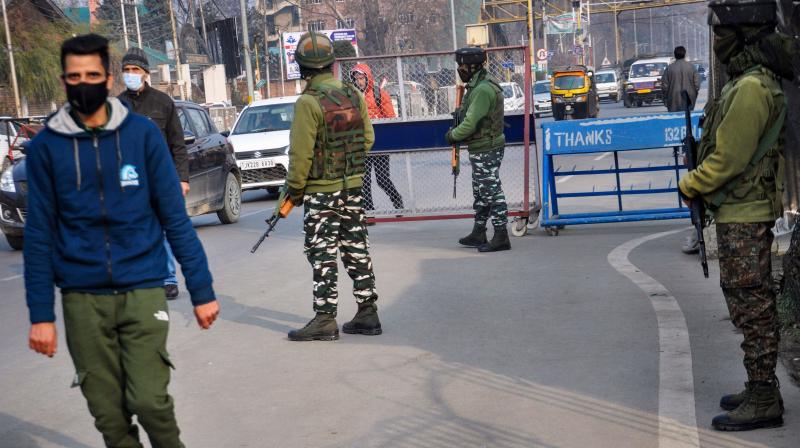 Security personnel stand guard during high alert after a millitant attack on a police bus in Zewan in which 3 policemen were killed and several others were injured, in Srinagar, Tuesday, Dec 14, 2021. (PTI)

SRINAGAR: The authorities in Jammu and Kashmir have issued an updated security alert across the restive Union Territory in view of the stepped-up militant attacks on policemen and other uniformed forces.

While police personnel have been asked to remain extra vigilant in view of the recent attacks on their colleagues, the combined security grid is acting aggressively against separatist militants and their overground workers and sympathisers.

On Monday evening, an assistant sub-inspector and two other policemen were killed, and eleven others wounded in a sneak attack on a police bus in Zewan area on the peripheries of capital Srinagar. The police officials say that it was a weapon snatching attempt made by the cadres of proscribed Jaish-e-Muhammad (JeM) but was foiled by the policemen onboard the bus.

Earlier at the weekend, two policemen were shot dead by militants in the northern town of Bandipore. This was the seven such attacks on uniformed forces in the past few weeks, the police sources said.

The policemen targeted at Zewan were returning to their barracks after performing law and order duties in sensitive areas of the capital city which had earlier during the day witnessed clashes between irate crowds of men and women and the security forces over the killing of two suspected militants by the latter.

Monday’s incident was a major attack on the security forces in J&K after the February 14, 2019 Pulwama suicide attack. A senior police official Vijay Kumar said that the attack on the police bus was carried out by three members of ‘Kashmir Tigers’ which, he said, is an offshoot of the JeM terror group. “It was actually a weapon snatching attempt which was foiled by the policemen. In their retaliatory fire one of the assailants was injured. We have launched a manhunt for them and, hopefully, we will track them down soon,” he said.

Following these attacks, the J&K police has reminded its members of the guidelines which discourage them from going out of their places of postings or deployment alone, unarmed and without seeking prior permission or informing their seniors. The off-duty policemen including those at home on leave have once again been asked to avoid mingling with people outside their immediate family members or visit public places or those they think could be unsafe. “The off-duty police personnel have been asked to remain extra vigilant and take all precautionary measures while attending social functions such as weddings and birthday parties and avoid places of worship and instead pray at home,” a police official who spoke to this correspondent on condition of anonymity said.

Inspector General of Police (Kashmir range) Vijay Kumar said that arrangements are being made to ensure the policemen while travelling between places for official assignments do use bulletproof vehicles only. “We’re maintaining high alert and cops requiring travel from one place to another will be provided bullet proof vehicles”.

In the backdrop of the attack on the police bus, he said, “We’re taking all necessary preventive measures. We will install lighting gadgets at places where it is required and are taking other preventive measures including increasing durations of road-opening parties’ deployment (along the routes frequented by policemen)."

Meanwhile, the security forces footprint in Srinagar and some other towns of the Valley has increased over the past few weeks. While new pillboxes and sandbag bunkers of the Central Reserve Police Force (CRPF) and other Central armed police forces and J&K police have come up at various locations in and outside Srinagar, their other defensive activity including jointly laying makeshift checkpoints or nakas at places and conducting random searches in crowded area has also increased.