India   All India  15 Dec 2019  'I am totally alright,' says Siddaramiah after getting discharged from hospital
India, All India

'I am totally alright,' says Siddaramiah after getting discharged from hospital

To a query about his return to political activities, the former K'taka CM said he will rest for a week before starting. 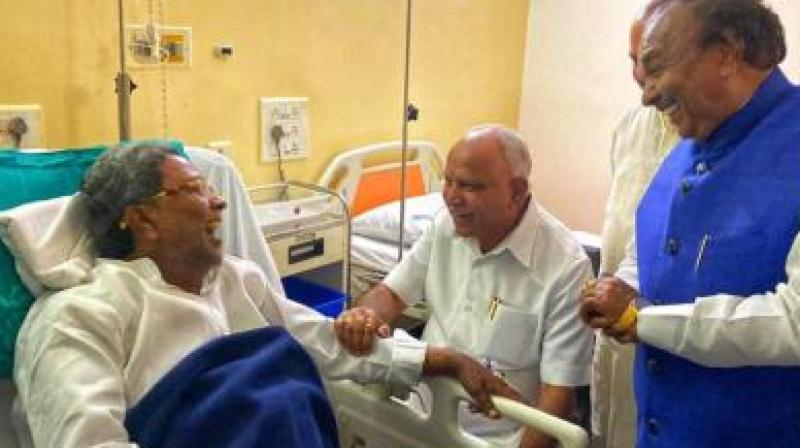 'There is no problem now, I'm totally alright, as a normal person like earlier I can perform my activities, there is nothing to worry,' Siddaramaiah said. (Photo: Twitter)

Bengaluru: Senior Congress leader Siddaramaiah on Sunday said he was totally fit and fine, as he was discharged from a private hospital here, where he underwent angioplasty recently.

"There is no problem now, I'm totally alright, as a normal person like earlier I can perform my activities, there is nothing to worry," Siddaramaiah said.

Speaking to reporters ahead of his discharge from the hospital, he said, he is now a healthy person.

To a query about his return to political activities, he said he will rest for a week before starting, and did wish to answer any political question.

The 71-year-old leader had undergone angioplasty on December 11 on Doctor's advice afterhealth check-ups and tests.

Thanking Doctors and hospital staff, Siddaramaiah recalled "in August 2000 two of his blood vessels had blocked and angioplasty was done and stent was placed.. after 19 years now out of those two blood vessels one got blocked once again-- 95 per cent."

He said, after tests, Doctors decided to go for angioplasty and the new stent has been placed.

Also thanking political leaders including Chief Minister B S Yediyurappa, who visited him at the hospital, the former Chief Minister said, it was out of humanity and for those in politics there are no permanent enemies or friends.

Dr Ramesh, a cardiologist who treated Siddaramaiah said, all his parameters are "normal" and he was "fine".

"We have advised him to go for walk, and not to travel at least for fifteen days," he said.

Siddaramaiah's supporters who had gathered near the hospital cheered their leader as he boarded his carto leave.

Siddaramaiah had quit as Congress Legislature Party leader last Monday, after the party posted a poor show, winning only two seats, as against the 12 it had held of the 15 which went to the bypolls on December 5.