India   All India  15 Dec 2019  Buses torched in Delhi over CAA; Jamia dissociates itself from violence
India, All India

Buses torched in Delhi over CAA; Jamia dissociates itself from violence 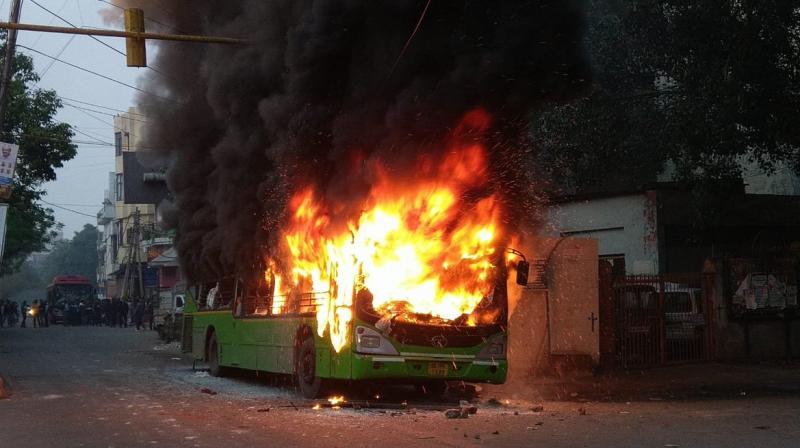 A student claimed that after the policemen used force, some protesters torched buses and indulged in vandalism. (Photo: Twitter | ANI)

Saimon Farooqui, the national secretary of Congress-affiliated National Students' Union of India, claimed the protesters were peacefully sitting on Mathura Road when policemen tried to 'trouble' a couple of them, who resisted.

A Jamia Millia Islamia students' group said they had nothing to do with the arson and violence.

They alleged that 'local elements' joined the protest and 'disrupted' it. They said they returned to campus as the protest turned violent and were protesting on the campus peacefully.

''The students of Jamia Millia Islamia dissociate themselves from the violence that has erupted today. We have time and again mainatained that our protests are peaceful and non-violent. We stand by this approach and condemn any party involved in the violence. We have maintained calm even when students have been lathi-charged and some women protestors have been badly beaten up. Media personnel are a witness to these events. Violence by certain elements is an attempt to vilify and discredit genuine protests. We appeal to everyone to share this message,'' the statement read.

Some of the protesters claimed that the police baton charged them when they were holding a peaceful agitation.

A student claimed that after the policemen used force, some protesters torched buses and indulged in vandalism.