Upgrading technical education institutions is key to ‘Make In India’

A tight link between learning centres and industry may spawn start-ups, produce engineers fit to be entrepreneurs. 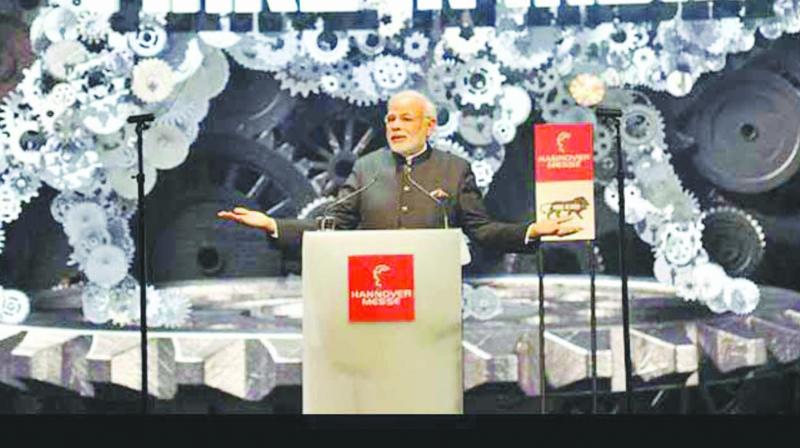 A file photo of Prime Minister Narendra Modi speaking at the opening of the 2015 industrial fair in Hanover, Germany.

In its haste to coin a catchy populist slogan, the Narendra Modi administration has sacrificed the success of the nationally-vital  “Make in India” initiative on the altar of short-sighted business opportunism by ignoring the need to first upgrade the generally poor quality of Indian institutions of higher technical education.

Instead of seeking to enhance our higher technical education through collaborations with globally reputed institutions of excellence, India has opted for outright weapon purchases, with weak, local outsourcing or “offset” requirements from foreign manufacturers.

This crucial lapse has blighted the “Make in India” initiative, which, though noble in its aim to vitalise domestic manufacturing across a wide range of sectors, has now narrowed to focus mainly on the defence sector.

The criticality of this sector is reflected in the emergence of India as one of the world’s leading importers of defence equipment. Government statistics show that India imports approximately 60 per cent of its defence requirement.

Within these two desperately wide figures lie the tragedy of an incompetently conceived and executed Make in India initiative.

The evidence is there for all to see, except perhaps the “visionally impaired” who run the initiative, and their overseers, the grandiloquently named Niti Aayog or National Institution for Transforming India.

More to the point, the another government body  - the All India Council for Technical Education (AICTE) - charged with steering technical education in the country, has admitted that nearly 200 “substandard” engineering colleges have applied for closure, meaning there were around 80,000 less places for prospective engineering students this year.

Apparently the poor quality of engineering education and still consequent unemployability was more evident to youths aspiring for jobs and their parents than the bureaucrats who drove “Make in India” and Niti Aayog.

The sad state of domestic manufacturing was decades in the making, acerbated by the earlier Manmohan Singh administration’s decade-long blind faith in promoting big business and an IT industry content with producing low grade labour for the US and European markets. That it birthed our own behemoths such as TCS and InfoSys, with their relatively low employee intake, thereby contributing to growing unemployment, despite surging GDP numbers, made no difference to the highly qualified economist-Prime Minister. It was a final nail in the coffin of the SMEs (small and medium enterprises).

The other turning point, according to astute observers of this scenario, is the attempt to manufacture state of art military products such as the Marut aircraft with Hindustan Aeronautics Limited (HAL) and the Arjun main battle tank (MBT) by the Defence Research and Development Organisation (DRDO).

The HF-24, Marut, the first jet fighter-bomber designed and built in Asia, was the consequence of a rare inspirational act by the government to hire a German designer, Kurt Tank, in 1956, to help HAL design a jet fighter. Widely acknowledged as a fighter with the potential to launch the domestic defence industry, this creative light was extinguished in its infancy without explanation.

In the Arjun tank saga, the decades long, millions of dollars costing MBT inducted in the Army in 2009, has been plagued by problems, even as the DRDO marches ahead with its sequel.

The purchase of artillery guns from the Sweden’s AB Bofors in the 1980s and the recent securing of 36 Rafale fighter aircraft from France’s Dassault Aviation present a different issue - charges surrounding the purchase of good weaponry. These controversies adversely affect timely acquisition of arms and hurt national interest.

The effect of these reverses have been a bonanza, wittingly or unwittingly, for the triumvirate of overseas weapon makers, their brokers and adversaries on our borders.

The template for fixing the problem is present in other nations.

Though Bangalore — with its leading Public Sector Enterprise Hindustan Aeronautics Limited (HAL) — has the admirable Indian Institute of Science in its vicinity to draw talent from, it is a far cry from France’s Toulouse and at Stanford University in the Silicon Valley in Palo Alto in the US.

Toulouse is a world hub for the aeronautics and aerospace industry, ever expanding, as it draws from a vast pool of talent from its centres of higher technical education.

Here was the birthplace to a large extent of the iconic supersonic Concorde, the giant Airbus A380, the European satellite navigation system Galileo and the Philae landing craft.

It is in fact the headquarters of the giant Airbus Group and home of the equally mammoth Thales Alenia Space. Its fulcrum is the high quality cluster of research centres, including the National Space Studies Centre French Aerospace Research Centre, and the CNRS Analysis and Systems Architecture Laboratory and the outstanding Institut Supérieur de l’Aéronautique et de l’Espace (ISAE-SUPAERO) or National Higher French Institute of Aeronautics and Space.

The connection between the learning centres and industry is tight, spawning start-ups in its wake, as an enlightened education system produces engineers with the entrepreneurial experience and skills.

Its population is just under one million, while Bangalore’s is estimated to be more than 11 million.

Another model to consider is Stanford University in the United States. It built its early reputation providing military technology engineering resource, but later grew in ambition and vision to lease out its land to tech companies such as Lockheed and General Electric in their pioneering days, and spur the Silicon Valley.

In India, the government set up a slew of state-owned public sector undertakings (PSUs) and ordinance factory boards (OFBs) that to this day dominate defence manufacturing. The government has now opened up the sector to the private sector, which has off course no recourse but to dip into this same pool of poor talent for its workforce, besides being equally parsimonious in spending on R&D.

The nation, universally acknowledged as lagging way behind in higher education standards as a whole, and technical instruction in particular, has now no choice but to encourage elite foreign institutions to enter the country in collaborations, unmindful of opposition by vested domestic interests, including academia.

The building up of elite, technical institutions rich cities such as Toulouse and universities of the soaring ambition of Stanford are not options for the near or even medium term. One possible alternative is in attracting elite global institutions would be to insist on their local collaborations as part of offset by their respective countries. The other option, though long drawn, is to revamp our higher education system much as China has done in recent decades. A carefully considered combination of the two would be the best.

The author was a foreign correspondent with Reuters and now heads a foreign policy think tank and journal, Global Dialogue Review