India   All India  15 Dec 2017  Keen voters in Gujarat : Grooms arrive to vote before heading for marriage
India, All India

Keen voters in Gujarat : Grooms arrive to vote before heading for marriage

Women playing 'garba' on their way to polling stations were also seen on the day of the voting. 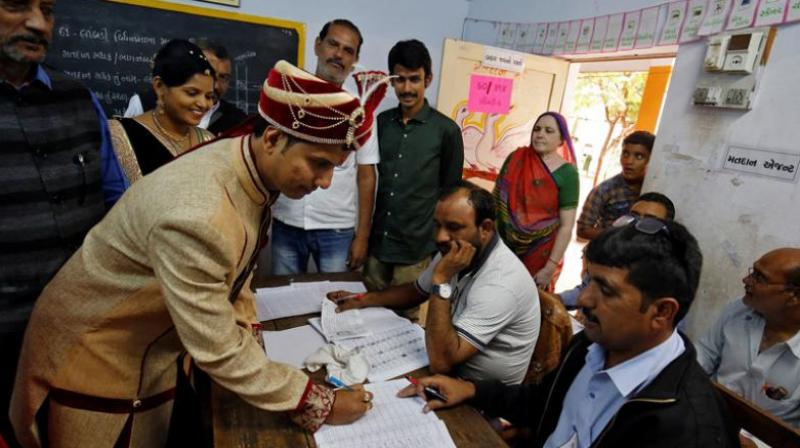 A few bridegrooms in Gujarat chose to vote first before heading to the wedding venue. (Representational Image | PTI)

Ahmedabad: As Gujarat voted in the second phase of polling on Thursday, some eye-catching scenes – women playing garba on their way to booths and bridegrooms heading to polling stations before marriage venues - underscored the enthusiasm of the electorate.

From youngsters to elderly, politicians to bureaucrats, people from all sections of the society came out to get inked.

His wedding scheduled for Thursday, Harish Bhavsar, a businessman from Vatva area, was at the cusp of beginning a new life. But it did not stop him from exercising his franchise. Before heading to the wedding venue, he cast his vote.

"I didn't want to miss voting and that's why I ensured I reached here (polling booth) before proceeding for marriage," he said.

Another bridegroom, Satish Patel went to the polling booth in the Ghatlodia assembly segment in Ahmedabad and exercised his franchise before heading to the marriage venue.

Adding colours to the democratic exercise, some women voters were seen playing ‘garba’, a popular dance form of Gujarat, on their way to a poll booth in Satellite area in Ahmedabad.

For Ram Krishna Choksi, it was an occasion to assert his democratic right, which the 80-year-old has been doing election after election. Accompanied by his wife Urmila, he came to cast his ballot at a polling booth at a college.

"It is the duty of every citizen to vote," said the octogenarian.

Asked about his expectation from the government to be formed after the polls, he said, "It should be clear in its ideas of welfare of the people. It should ensure that all citizens get access to cheap food, education and healthcare."

Dhaval Thakor, a first-time voter, was happy over his maiden walk to the polling booth and said he wanted the new government to deal with the issues of livelihood and create more job opportunities.

"I work at an electricity shop. I want the next government to ensure there is no dearth of jobs for people like me. I could not continue my studies after failing in the board examination, but I need a job to sustain my life," the 19-year-old said.

Senior bureaucrats, including chief electoral officer BB Swain and chief secretary JN Singh, among others, too lined up with their family members to cast their votes.

Governor OP Kohli also cast his ballot and appealed to the people to step out of their homes and exercise their franchise.

"The success of a democracy depends on voters," Kohli told reporters after emerging from a polling booth in Gandhinagar near Ahmedabad.

Politicians registered as voters in Gujarat, too, came out to get inked.

The second and final phase of polling covered 93 seats spread over north and central Gujarat. The first phase of voting for the 182-member house, held on December 9, covered 89 seats.