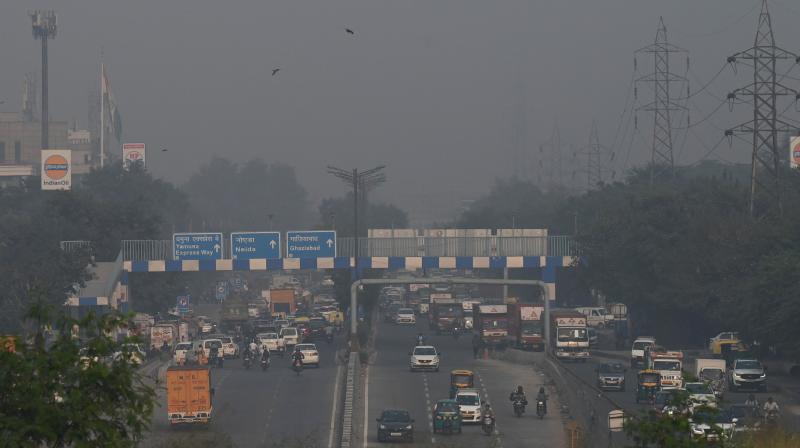 New Delhi: The Supreme Court Monday directed the Centre to convene on Tuesday a meeting of the Commission for Air Quality Management in National Capital Region and Adjoining Areas, including Punjab, Haryana and Uttar Pradesh, to decide on what “emergency steps can be taken to effectively control” the worsening air pollution in the national capital by focusing on vehicular traffic, including heavy vehicles, road dust, construction and industrial activities and the operation of thermal power plants.

Ordering the convening of the nodal body to decide on the emergency concrete steps that can be taken to considerably improve air quality in the national capital, Chief Justice N.V. Ramana, heading a special bench that also comprised Justices D.Y. Chandrachud and Surya Kant, directed the Punjab, Haryana and Uttar Pradesh governments to persuade their farmers to hold their hand on stubble burning, while making it clear that it was not seeking any punitive action.

“We are not to punish the farmers, but to persuade them to hold their hands for one week”, CJI Ramana said. Passing the order, an apparently irritated over the state of affairs where the court had to direct what the Commission for Air Quality Management in the National Capital Region and Adjoining Areas had to do to deal with the emergency situation, CJI Ramana said: “You don’t do it. When we do it, you talk of judicial overreach. We have to fix the agenda of the commission as to what they need to do.”

Directing posting of the matter on Wednesday (November 17) as the first matter, the court observed that despite the “marathon meeting” of the nodal body on Sunday, the court said what was before it was long-term measures and nothing to instantly deal with the emergency situation.

“How many road cleaning machines are there? How much do they cost? Can the states state governments afford them? Are they available (in the market on demand)? What will happen to daily wage earners (currently engaged in road cleaning)?”, asked Justice Surya Kant.

Referring to the Delhi government’s decision to close schools and asking its staff to work from home to reduce vehicular traffic on the roads, Chief Justice Ramana wondered if the same could be extended to the Central government staff living in the NCR adjoining Delhi.

When in the course of the hearing it emerged that farm fires and stubble burning contributed only four per cent to the pollution in Delhi and the major contributory factors were vehicles, dust, construction, industrial activity and thermal power plants, Justice Chandrachud said: “Now the cat is out of the bag, farm fires and stubble burning contribute four per cent to pollution.” He then asked: “What are the steps being taken to target the other factors to reduce pollution?”

At the start of the hearing, as senior lawyer Vikas Singh told the court that the extent of stubble burning in Punjab was being understated and no action was being taken against farmers due to electoral and political considerations as Punjab was headed for Assembly polls, CJI Ramana said: “We have nothing to do with politics. We want to bring down pollution. We are not concerned with elections and politics.” The CJI noted that at the last hearing on November 13, the court had said that no political colouring of the pollution issue should be done.

CJI Ramana wondered if the senior lawyer was in favour of punishing the farmers as Mr Vikas Singh, appearing for petitioner Aditya Dubey, persisted and said the Government of India had made a wrong statement in court on Monday on stubble burning as the high-powered meeting on Sunday night recorded that stubble burning even now was responsible for 35-40 percent of Delhi’s air pollution.

As Mr Vikas Singh advocated an “independent agency” to monitor the air quality in Delhi, Justice Chandrachud, referring to the 53-page affidavit filed by the Union of India on November 13, said: “We have to build up our way through those steps (suggested by the Union of India), we can’t conjure new situations. We need to show the results on the ground.”