India   All India  15 Nov 2021  Manipur ambush was in retaliation: Terrorists
India, All India

Manipur ambush was in retaliation: Terrorists 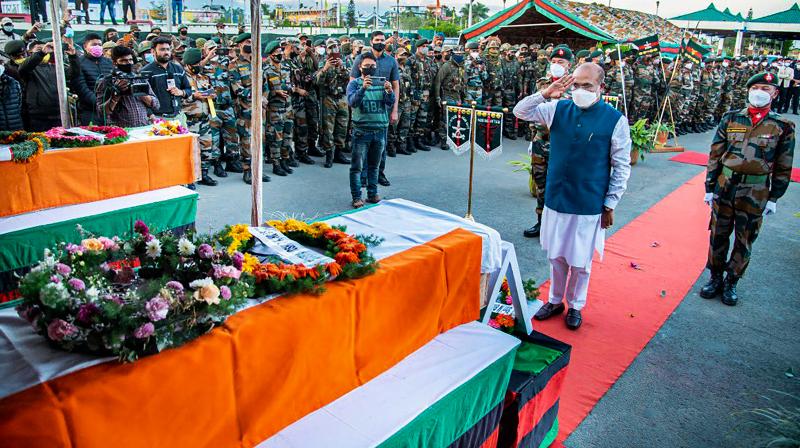 The separatist outfits which are operating from Myanmar in a statement to local newspapers in Imphal said that Saturday’s ambush was carried out in retaliation to hostility by Assam Rifles in the name of the Armed Forces (Special Powers) Act (AFSPA).

Informing that Army headquarters was closely monitoring the situation, security sources said that additional troops have been rushed to their area and a combing operation has been launched to nab the militants who are suspected to have entered India from Myanmar.
Security sources said that though PLA claims to have shifted its camps from Myanmar but its cadres are still operating and taking shelter in Myanmar. Asserting that the outfit is backed by the Khaplang faction of NSCN, sources also claimed that the PLA has been operating from Myanmar where they continue to have camps, like the other Meitei groups, and remain active with no ceasefire agreement with the Indian government, and have so far not expressed any intent of peace talks with India.

The roots of insurgency in Manipur dates back to the 1960s when the United National Liberation Front (UNLF) emerged “due to resentment within a section of Meitei society against the merger of Manipur state with the Union of India". However, several other insurgent groups came into existence later to demand an independent Manipur.

A Parliamentary committee report observed that if the Meitei insurgency began with the formation of UNLF, the “birth of the People’s Liberation Army (PLA) radicalised the Meiteis further". The  PLA cadres in its initial years were trained by the NSCN and hold Marxist ideology.

The group was founded on September 25, 1978, under the leadership of N. Bisheshwar, after having broken away from its parent body, the United National Liberation Front. In 1979, the PLA’s political wing Revolutionary People’s Front (RPF) also came into existence.