Shiv Sena will lead govt in Maharashtra for next 25 years: Raut

The firebrand Sena leader said his party's relation with Maharashtra is permanent and not temporary. 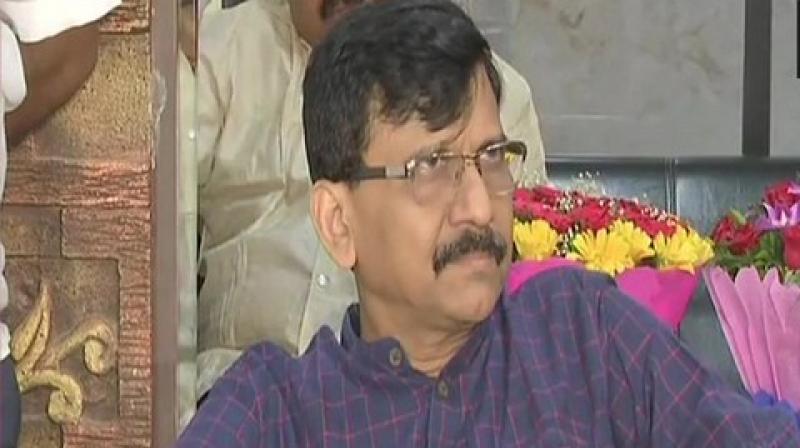 The Rajya Sabha MP, who turned 58 on Friday, was responding to questions on whether his party will share the chief minister's post with the NCP and the Congress, its allies in the prospective three-party government. " (Photo: ANI)

Mumbai: Maharashtra's next government will be led by the Shiv Sena and the common minimum programme (CMP) being worked out along with the Congress and the NCP ahead of its formation will be in the "state's interest", said party spokesman Sanjay Raut on Friday.

The Uddhav Thackeray-led saffron party will lead the government in Maharashtra for the next "25 years" and not just five years, claimed Raut while talking to reporters here. The Rajya Sabha MP, who turned 58 on Friday, was responding to questions on whether his party will share the chief minister's post with the NCP and the Congress, its allies in the prospective three-party government. "

Talks are on with the Congress and the NCP to work out a common minimum programme which will be in the interest of the state and its people," he said.

"Whether it is a single party government or an alliance, an agenda for governance is necessary. There are infrastructure projects to be taken forward, (and issues related to) drought,unseasonal rains (are to be tackled). "Those coming with us are experienced administrators. We will benefit from their experience," he said. Regarding alliance with the Congress, the Sena's political rival till recently, Raut said leaders of the country's oldest party have contributed to freedom struggle as well as development of Maharashtra.

Asked whether the Sena will share the CM's post on a rotational basis in the next dispensation, Raut said, "We want to have the chief minister's post for the next 25 years. The Shiv Sena will provide leadership to the state no matter who tries best to stop it."

The firebrand Sena leader said his party's relation with Maharashtra is permanent and not temporary. "Our party is active in the state's politics for 50 years," he said.

The Shiv Sena was founded by Bal Thackeray in 1966. Asked if the Sena, post tie-up with the Congress-NCP, will give up its demand for the Bharat Ratna for Hindutva ideologue Veer Savarkarand accept Muslim reservation, Raut evaded a direct reply and said, "We know the source of such speculation."

To a query whether a power-sharing formula envisaging 14 portfolios each for the NCP and the Sena, and 12 for the Congress has been decided (as being speculated in media), he declined to disclose details of the proposed coalition arrangement between the three parties. "You don't worry about power-sharing. Uddhavji (Sena chief Uddhav Thackeray) is capable of taking decisions," said the politician-journalist, who is also the executive editor of Sena mouthpiece 'Saamana'.

Asked how the Sena, a party identified with Hindutva politics and "anti-Congressism", will adjust with a non- ideological partner like Congress, he said, "What is ideology? We are working on a common minimum programme for the state's welfare. "Vajpayee (BJP stalwart and ex-PM Atal Bihari Vajpayee) headed an alliance of parties who came together on a common minimum programme. In Maharashtra, Sharad Pawar had led a Progressive Democratic Front (PDF) government (1978-80) of which the Jan Sangh, the BJP's earlier avatar, was a part."

"There have been instances earlier where parties of different ideologies have come together," he said, justifying the Sena's efforts to cobble up a ruling coalition with the Congress and the NCP, against whom the Sena fought the last month's assembly polls. The Sena reached out to the Congress-NCP combine for government formation after its demand for sharing the chief minister's post and equal distribution of portfolios was rejected by the BJP, its pre-poll ally.

The BJP and the Sena, which fought the October 21 polls in alliance, secured a comfortable majority by winning 105 and 56 seats, respectively, in the 288-member assembly. The Congress and the NCP won 44 and 54 seats, respectively. President's rule was imposed in the state on Tuesday after Governor Bhagat Singh Koshyari sent a report to the Centre, stating that formation of a stable government was impossible in the current situation.