13 MLAs who played role in pulling down JD(S)-Cong govt get bypoll tickets. 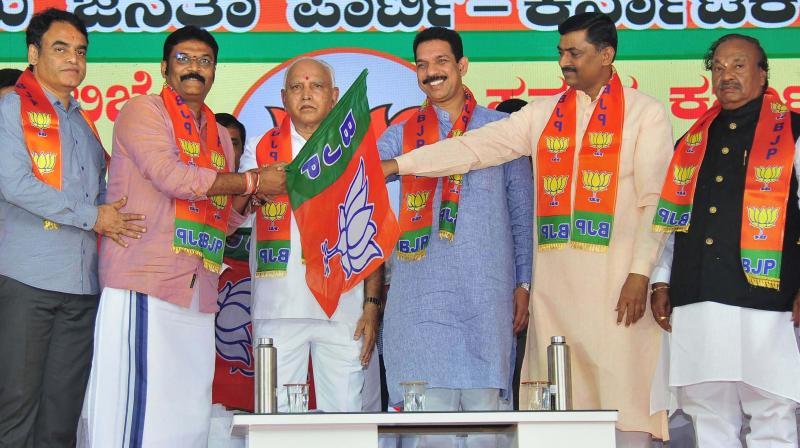 Bengaluru: In what could be considered a “thanksgiving” of sorts, the state BJP on Thursday allotted tickets for 13 of the 15 Assembly seats going to bypolls on December 5 to the disqualified legislators who played a pivotal role in pulling down the JD(S)-Congress coalition government in July.

Earlier in the day, 16 of the 17 disqualified MLAs  were inducted into the saffron party at a function at the BJP office at which most party stalwarts including chief minister B.S. Yediyurappa were present.

The BJP, however, sent ripples through political circles by not inducting veteran Muslim leader and disqualified MLA Roshan Baig and instead giving the  ticket to a corporator, M. Sharavana.

The second surprise pertained to the Ranebennur Assembly seat for which the party chose not to announce the name of disqualified Independent MLA R. Shankar though he was inducted into the party with sources saying the BJP is not sure of his poll prospects against Congress candidate and former Assembly Speaker K.B. Koliwad.

There is speculation that K.E. Kantesh, son of senior BJP leader K.S. Eshwarappa, is a frontrunner for the seat.

Shankar has been highlighting the large number of Kurubas (the community he belongs to) in Ranebennur  to push his case and has been lobbying with the BJP national leadership and  pontiffs of his community,  said sources. It’s believed that the BJP will decide on the Ranebennur ticket by  Friday.

The bypolls are being held for only 15 constituencies though 17 MLAs were disqualified with polls for RR Nagar which was represented by Munirathna, and Maski which was held by Pratapgouda Patil, yet to be announced.

Explaining the reason for leaving out Roshan Baig from the list of candidates and not inducting him into the BJP, sources said the party high command and the RSS vetoed the proposal on the ground that he is an accused in the multi-crore IMA investor scam now being probed by the CBI.

His name had also cro-pped up during the investigation into the murder of a RSS worker, Rudresh, said sources.

The Athani ticket went to Mahesh Kumatalli and a disappointed deputy CM Laxman  Savadi, whose name was doing the rounds for the seat (he is not a member of either House)  skipped the induction ceremony of the disqualified MLAs.

Party sources however asserted that he will be nominated to the Legislative Council after a current BJP member of the Upper House resigns as he has to become a member of any one of the Houses within six months after joining the Cabinet.

On Wednesday, the Supreme Court had allowed the disqualified MLAs to contest the bypolls while upholding their disqualification by then Speaker Ramesh Kumar.