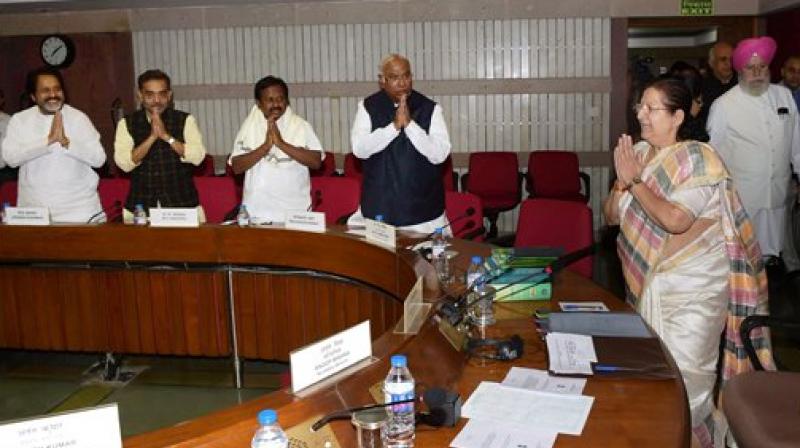 Lok Sabha Speaker Sumitra Mahajan chairs an all party meeting at Parliament in New Delhi on Monday ahead of the Winter Session. (Photo: PTI)

New Delhi: The upcoming Winter Session of the Parliament would see discussions on the demonetisation issue, Jammu and Kashmir unrest the One Rank One Pension (OROP) scheme and the merger of General and Railway budget, said Leader of Opposition in Lok Sabha and Congress leader Mallikarjun Kharge shortly after concluding the all party meet on Monday.

Apart from that, Kharge said, strong objection was taken by the opposition parties on the government's efforts to curb free speech in the country.

"Demonetisation which has caused adverse affects on poor people, daily wage earners, salaried people all of whom have been affected badly. So requested the government to take priority discussions on this," Kharge said.

"We will be giving various notices be it adjournment motion, calling attention, short duration notice. By adopting these we would like to tell the people that government's has taken wrong policy decisions," he added.

Lok Sabha Speaker Sumitra Mahajan said the parliament will also discuss the possibility of holding General and state assembly elections simultaneously and the prospect of government's funding in the elections.

"During the discussion all the parties raised one voice and that was for holding simultaneous elections for Lok Sabha and Assembly elections. They have been demanding a debate on this where state funding was also be discussed.

The Winter Session of Parliament is scheduled to take place between November 16 and December 16.