Mr Rivlin arrived on Monday on an eight-day visit to India, the first by any Israeli President in nearly two decades. 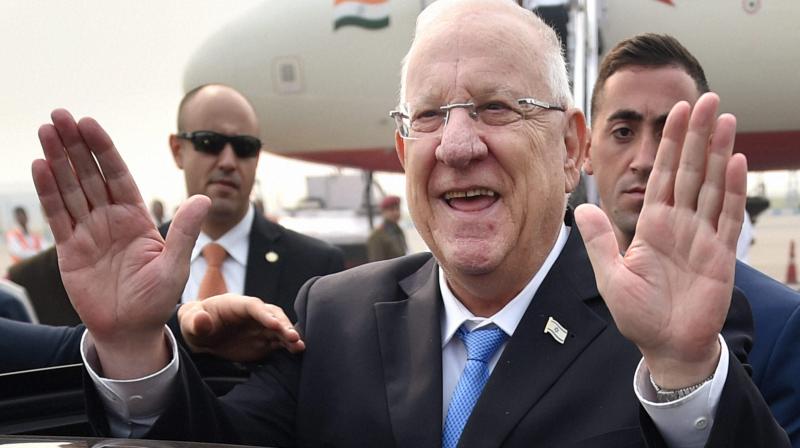 Israel President Reuven Rivlin on his arrival at AFS Palam for a six-day visit to India, in New Delhi. (Photo: PTI)

New Delhi: Friendship between India and Israel is at work “day in, day out” and is not a relationship “we should be hiding”, said Israeli President Reuven Rivlin as he pledged full support to India in fighting terrorism. Mr Rivlin arrived on Monday on an eight-day visit to India, the first by any Israeli President in nearly two decades.

Mr Rivlin, who is accompanied by a strong delegation of businessmen, will hold comprehensive talks with Prime Minister Narendra Modi on Tuesday on key bilateral and regional issues.

The Israeli President acknowledged differences with India on the Palestinian issue but spoke warmly about the growing Indo- Israeli ties as the two countries prepare to celebrate 25 years of establishment of full diplomatic ties between them next year.  Pledging full support to India in fighting terrorism, Mr Rivlin said that his country was proud to “stand with India in its defence of the values of democracy”.

“Terror is terror is terror, whoever carries it out and whoever are its victims. And we all have the duty to condemn in our words, and fight with our deeds against this terrible evil,” asserted the President, whose country is one of the biggest suppliers of defence equipment to India and is cooperating with it in a major way in dealing with terrorism.

Answering a question on “murmurs” in Israel that India keeps under wraps their relationship because of close ties with the Arab world and domestic political considerations, Mr Rivlin said, “Israel is proud of our friendship with India and I believe  India is proud of its friendship with Israel. This is a friendship that we see at work day in, day out...,” he said.