Indo-Pak relations took a major hit after attack on Indian Army base in Uri. 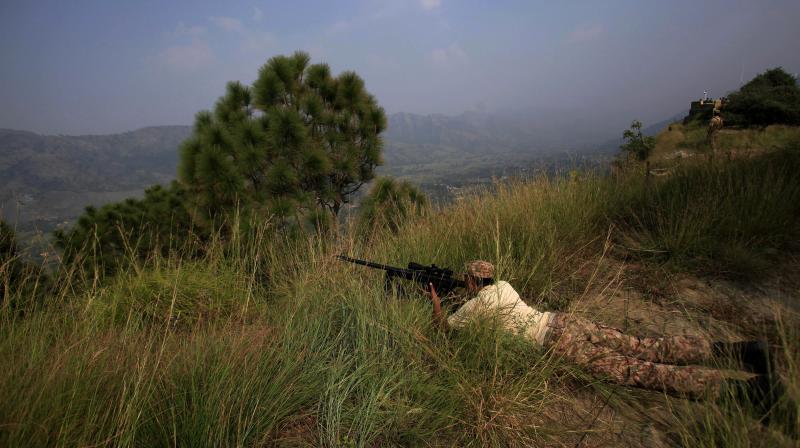 Pakistan army soldiers take position at a forward area Bagsar post on the Line of Control (LOC), that divides Kashmir between Pakistan and India, in Bhimber. (Photo: File/AP)

New Delhi: Use of heavy calibre guns by Indian forces are wreaking havoc among Pakistani forces across the Line of Control and also eliciting a rare admission by Pakistan on Monday when seven of its solders died in Indian firing in Bhimber in Pakistan-Occupied-Kashmir, a fact which drew no reaction from the Indian government till last reports came in.

Sources told this newspaper that seven Pakistani soldiers killed in action could be a result of two kinds of action — artillery shells landing in an unprotected section post which usually comprises about two bunkers or a targeted precision strike by a raiding party of Indian soldiers.

“It seems that recoilless anti-tank and anti-personnel armaments were used which has led to big casualties in the Pakistani side. In this particular area near Bhimber, Indian posts are at an elevation and overlooks many Pakistani posts so there is a distinct line-of-sight advantage where such heavy weapons are best utilised,” an informed source said on condition of anonymity.

“There is no doubt that in terms of weapons used, the escalation ladder is climbing. Many stretches of the LoC are already seeing extensive use of 81mm and 120mm guns which underlines the escalation.”

“Instead of just focusing on militants and infiltrators, we have started targeting military positions because when a soldier dies they will feel the pain while militants are expendable,” the source added.

In a November 11 official press release by Pakistan foreign secretary Aizaz Ahmad Chaudhry, the use of heavy artillery by Indian forces was pointed out during firing on November 9 in the Shahkot and Jura sectors on the LoC. Indian Army sources however pointed out that the Pakistanis were also using heavy weapons.

Indo-Pak relations are plumbing new lows ever since the September 18 attack by Pakistan-backed militants who attacked an Indian Army base in Uri.

India hit back very strongly on September 28-29 when Indian troops crossed into Pakistan-Occupied Kashmir to target areas used to gather terrorists killing many militants and Pakistani soldiers. Ever since the border areas on the two respective sides have been witnessing unprecedented firing and shelling.