Reports say that at least 5 people died on Friday in rain-related incidents, days after 4 lost their lives in pothole-related accidents. 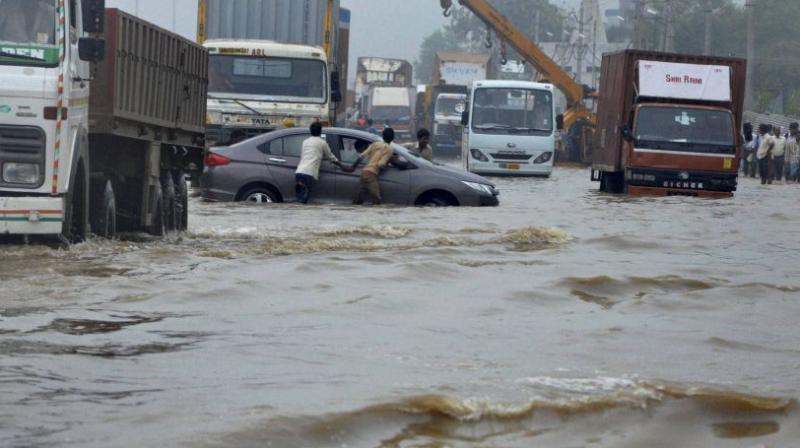 The torrential rains over the past two months have made 2017 the wettest year for Bengaluru. (Photo: PTI)

Bengaluru: Several people have been reported dead as incessant rainfall continues to lash Bengaluru and other parts of south India.

Reports say that at least five people died on Friday in rain-related incidents in the city, days after four lost their lives in pothole-related accidents.

The woman died after allegedly ramming her bike into a lorry in Bengaluru's Devanahalli. She was trying to avoid a pothole, which led to the accident.

On October 2, a couple was run over by a bus when the husband, Anthony Joseph, 55, tried to negotiate a pothole on the Mysore Road flyover. He and his wife Sagai Mary, 53, died on the spot.

Earlier, a priest was swept away in a stormwater drain after water gushed inside the temple.

In another incident, a 57-year-old woman and her daughter, swept away in a stormwater drain at Laggere after water from it flooded their house.

In a road accident, a woman rider of a two-wheeler was crushed to death under a truck while she was negotiating potholes at the Nayanadahalli junction.

All the accidents have happened on arterial roads, including a state highway.

These incidents have brought the Karnataka Government under sharp criticism over the alleged tardy progress on improving the condition of roads and sewage and desiltation of storm-water drainages.

Congress vice-president Rahul Gandhi, on Saturday, sought a report from the state government on the same.

The torrential rains over the past two months have made 2017 the wettest year for Bengaluru.

Torrential rains have also lashed parts of Hyderabad, Mysuru and nearby areas.