This is the first time in 16 years that Assembly elections in Gujarat will be held without Modi being directly at the helm of affairs in the state. 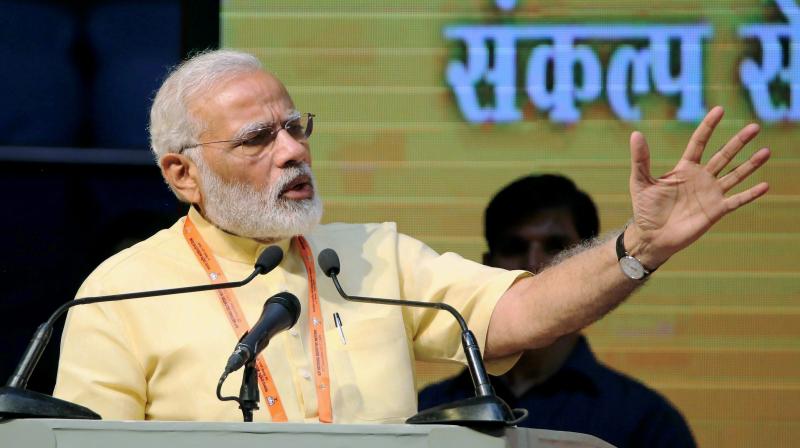 New Delhi: All is not well for the BJP in Prime Minister Narendra Modi’s home turf. Ground reports being received from Gujarat by the party high command indicate that the forthcoming Assembly polls could be the “toughest” one the party has faced in 15 years.

Apart from the anti-incumbency that chief minister Vijay Rupani’s government is facing, and the dalit and Patidar agitations which refuse to die down, there’s been feedback that Congress scion Rahul Gandhi’s recent rallies and yatras in Gujarat evoked a “positive response” and the party could “pose a major challenge.”

This is the first time in 16 years that Assembly elections in Gujarat will be held without Mr Modi being directly at the helm of affairs in the state.

With party president Amit Shah setting the target of 150 in the 182-seat Assembly, all eyes are on Mr Modi’s proposed visit to the state to address a mega rally in Gandhinagar on October 16. Some BJP functionaries say that the Prime Minister could play “Santa Claus” and offer “major sops” to Gujarat voters as a “Diwali gift”.

The Opposition, including the Congress, has accused the BJP of mounting pressure on the Election Commission to delay announcing dates for the Gujarat Assembly elections, to allow the Prime Minister to “announce sops”. And now BJP MP Varun Gandhi, in a statement that’s bound to embarrass his party, has described the Election Commission as a “toothless tiger.”

That the BJP is going all out to retain Gujarat by playing the Hindutva card was evident from the party’s move to bring in hardliners like Yogi Adityanath and Uma Bharati for campaigning. To woo women voters, the BJP has fielded Rajasthan chief minister Vasundhara Raje and, on Saturday, external affairs minister Sushma Swaraj reached Gujarat to address one lakh women from different parts of the state at “Mahila Townhall” programme.

But the tug of war between the BJP and Congress to woo the tribals in the state continues. According to the 2011 census, Gujarat’s 89.17 lakh strong tribal population constitutes 14.8 per cent of the state’s population.

“If we continue to get majority of the tribal votes, BJP shall win comfortably,” a senior party functionary said.

Though traditionally Gujarat’s tribal belt has long been a stronghold of the Congress, in the past few elections there has been a significant shift towards the BJP. That’s why the second leg of Congress vice-president Rahul Gandhi’s Navsarjan Yatra in Gujarat early this week focused on wooing the tribals with a visit to a temple and even participating in Timli — a tribal folk dance — in Chhota Udepur.

Besides Patels, the other dominating community is the OBC, estimated to be about 40 per cent of the state’s population.

After its victory in Uttar Pradesh Assembly polls, the Centre moved to provide constitutional status to National Commission for Backward Classes and later it raised the “creamy layer” ceiling for OBC reservation from Rs 6 lakh per year to Rs 8 lakh. This brought more OBC families in the group of those availing reservation benefits.

In a bid to woo the Patidars, the Gujarat government not only decided to drop all “non-serious cases” against the community, but it has also withdrawn a case against Patel quota stir leader, Hardik Patel, for allegedly insulting the tri-colour nearly two years ago.

“If the Pateidar community retains its faith in us, there will be no stopping the BJP and we shall easily hit the target of 150 seats,” a BJP leader said. Incidentally, it was former chief minister Madhav Singh Solanki who led the Congress to a massive victory by winning 149 of the 182 seats in 1989. The record has not yet been broken.

In the last Assembly elections in 2012, the BJP had won 119 seats, while the Congress managed 57 seats.