Both Rajesh and Nupur Talwar are likely to be released from Dasna prison on Monday following their acquittal in the double murder case. 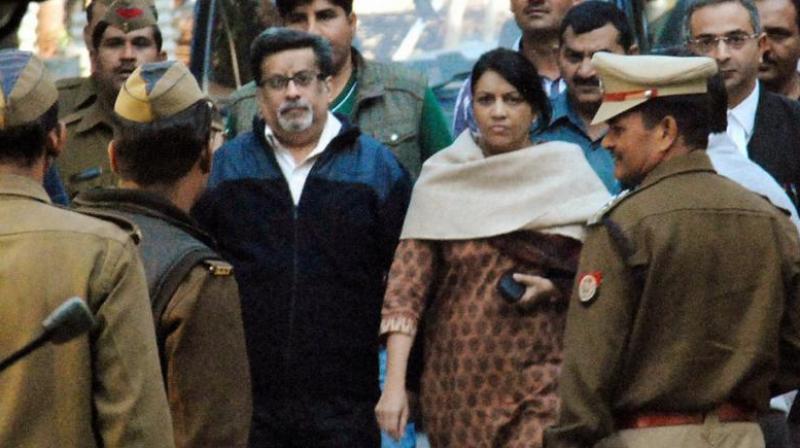 The two are lodged in the Dasna prison in Ghaziabad since November 2013 after they were awarded life sentence in the case. (Photo: PTI/File)

Dasna (UP): Dentist couple Rajesh and Nupur Talwar will visit the Dasna Jail every 15 days to attend to inmates facing dental problems after their release following acquittal in the murder case of their daughter Aarushi and domestic help Hemraj, jail authorities said.

The two are lodged in the Dasna prison in Ghaziabad since November 2013 after they were awarded life sentence in the case.

Both Rajesh and Nupur Talwar are likely to be released from Dasna prison on Monday following their acquittal in the sensational double murder case.

The dentist couple had helped revive the near "defunct" dental department at the prison hospital, a jail official said.

"We were concerned about the fate of our dental department after their (Talwars) release. They (Talwars) have assured us that they would visit jail to attend to inmates every 15 days even after their release," jail doctor Sunil Tyagi said.

Tyagi said besides prisoners, Rajesh and Nupur Talwar have also been treating jail staff, police officials and their children.

"Since Talwars have come here (prison), they have treated thousands of patients who are happy with their services," he said.

To manage rush of dental patients at the jail hospital after Talwars' release, prison authorities have also tied up with a Ghaziabad-based dental college

"The doctors from the dental college will also visit Dasna Jail twice a week to attend to patients so that inmates don't face problem," Tyagi added.

Since their acquittal by the Allahabad High Court, there has been a steady increase in patients wanting to consult the couple.

Sources in the jail said Rajesh Talwar's brother Dinesh Talwar, who is an ophthalmologist, would also visit the prison every 15 days along with his team to see patients.

The dentist couple had challenged the sentence in the Allahabad High Court, which acquitted them in the sensational double murder case earlier this week.