The court said it was unable to agree with the contention of the probe agency as 'different persons react differently in a given situation'. 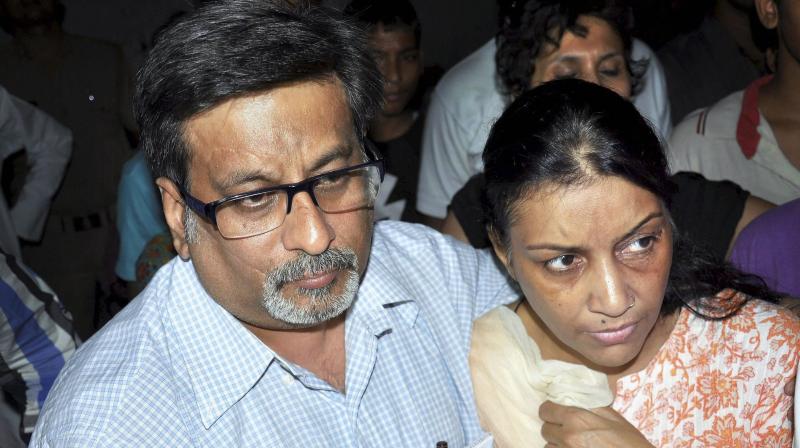 In its 273-page verdict acquitting dentists Nupur and Rajesh Talwar in the murder of their daughter Aarushi and Hemraj, it also said the prosecution 'miserably failed' to prove that the Talwars had destroyed material evidence and added that the finding recorded to the contrary by the trial court could not be maintained. (Photo: PTI)

Allahabad: The Allahabad High Court has castigated the CBI for its theory on the murder of domestic help Hemraj in the Aarushi murder case, saying it is an "impossible hypothesis" and "patently absurd".

In its 273-page verdict acquitting dentists Nupur and Rajesh Talwar in the murder of their daughter Aarushi and Hemraj, it also said the prosecution "miserably failed" to prove that the Talwars had destroyed material evidence and added that the finding recorded to the contrary by the trial court could not be maintained.

Analysing the prosecution case, a division bench of justices B K Narayana and A K Mishra refused to agree with the submission of CBI lawyer Anurag Khanna that the conduct of the dentist couple on finding their only daughter murdered, as noticed by the witnesses, was another circumstance which indicated their complicity.

The court said it was unable to agree with the contention of the probe agency as "different persons react differently in a given situation".

Justices Narayana and Mishra made the observations last week while allowing the appeals of Nupur and Rajesh Talwar against a Ghaziabad CBI court verdict sentencing them life term for the murder of 14-year-old Aarushi and Hemraj.

"The prosecution theory that the appellants had hidden the dead body of Hemraj on the terrace of their flat is patently absurd and improbable...," the court said.

It said this theory contemplated an "impossible hypothesis" that the body was hidden by the Talwars on their terrace with the intention of disposing it of on getting a suitable opportunity.

The court said the theory was based on the hypothesis that the Noida Police would not be able to find the body on the terrace on May 16, 2008 when Aarushi was found dead in her room in the Talwar residence by her parents with her throat slit.

Hemraj's body was found the next day. The Central Bureau of Investigation had taken over the probe into the case from the Noida Police.

Coming down heavily on the prosecution, the court said on careful evaluation of the evidence of four police personnel, it transpired that the prosecution witnesses made material improvements in their evidence tendered during the trial.

Their testimonies during the trial were "conspicuous by their absence in their previous statements recorded under Section 161 Cr.P.C. (by the police)," it said.

Justices Narayana and Mishra said the circumstances lent credence to another theory that the murder of Hemraj was committed on the terrace of the flat near a cooler. They said as the prosecution failed to pick up fingerprints of the persons who had put the cooler panel on the body of Hemraj, the court did not consider it proper to presume that the panel was put on the body by the Talwars in the absence of cogent evidence.

"In fact, the CBI has miserably failed to lead any evidence which may even remotely suggest that Hemraj was murdered in the bedroom of Aarushi and then his dead body was wrapped in a bed sheet and dragged from Aarushi's bedroom upto the terrace," the judges said. The court also said that the non-breaking of the terrace door lock was not on account of non-availability of the key of the terrace door but due to the negligent and callous approach of the Investigating Officer of the case, Data Ram Naunaria.

Moreover, the prosecution has failed to prove by any cogent evidence that the Talwar duo, despite being in possession of the key of the terrace door lock, had refused to make it available to the police, they said.

"The prosecution's allegation in this regard, therefore, is baseless and wholly irrelevant for fastening the appellants with the guilt," the court said.