"This Qur’an is one of the finest manuscripts produced in Kashmir in the first half of the nineteenth century," a report said. 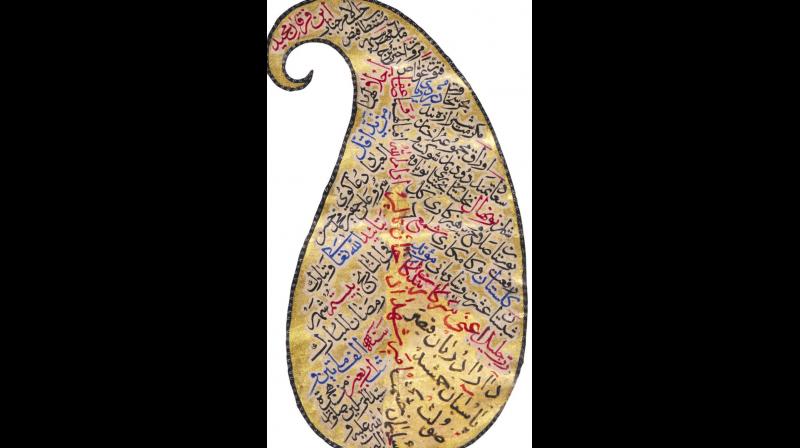 “This Qur’an is one of the finest manuscripts produced in Kashmir in the first half of the nineteenth century,” a note from the world's largest brokers of fine and decorative art, jewelry, real estate and collectibles had said before putting the manuscript for auction at Christie’s London some time ago, a report appearing in a local news portal said.

Giving the description of the sold manuscript, the Sotheby’s says on its official website that it is an illuminated Qur’an copied by Muhammad Hasan with a marginal commentary copied by Muhammad Isma’il in Kashmir and dates back to 1246 AH (the Hijri year of the Islamic lunar calendar) corresponding with 1831 AD.

According to it, though there are stains and rubbing, some losses to the illumination and the gold, minor tears, some crackeleaure and scratches to the binding, as viewed, the manuscript was in good condition when put to auction.

“This Qur’an is one of the finest manuscripts produced in Kashmir in the first half of the nineteenth century. Not only does it bear the names of two scribes who have been involved in copying it, but also the names of the binder and the patron. Dated Qur’ans from Kashmir are rare, especially if decorated with such lavish illumination,” it said.

Hasan signs as the copyist of the Qur’an and Muhammad Isma’il as the copyist of the tafsir in the margins. “Each lacquer plate of the binding is finely decorated with a central panel with interlacing flower scrolls and plants, among which there is the signature of Aziz Mughul. The name of the patron as well as the date 1246 AH/1831 AD are written in black along the outer border. It is interesting to note that along with his name, Muhammad Isma’il, the patron is named tajir al-Isfahani (a merchant from Isfahan)”.

Muhammad M Saleem Beg, Convenor of the J&K chapter of Indian National Trust for Art and Cultural Heritage (INTACH) said, “I’m happy it got an attractive price at the auction. Someone who knew the value of, as we learn from the Sotheby’s, a rare and beautifully handwritten Qur’an, bought it and I’m sure it must have gone into safe hands.”

Victor Jacquemont, a French traveller who was in Kashmir the same year this Qur’an was copied (1831) records that the Himalayan region was a big centre for the production of the manuscripts and there were between 700-800 copyists in the Valley. While Kashmiri Qur’ans are usually not signed and can be quite formulaic in their layout and decoration, this copy is extensively and finely illuminated, and must have been a commission by a Persian merchant who was resident in Kashmir in 1831, the Sotheby’s said.

‘Kashmir Life’ portal quotes Hakim Sameer Hamadani, who has done his doctorate on Islamic architecture, as saying the copying seemingly has been commissioned by the Iranian merchant Muhammad Ismail and who apparently has written the “tafsir on the margins of this mushaf”. “For most of the last three centuries, Iranian, Georgian and Armenian merchants involved in the lucrative Pashmina shawl trade were operating from Srinagar. A graveyard in Hassanabad area was known as Iranian or musafir mazzar, where some of these Iranian merchants are buried,” he said.

Hamadani, who is the Design Director at the INTACH Kashmir, while deciphering the Sotheby’s details, said Hassan has been the calligrapher of the scripture, and the naqashi (painted lacquered) binding has been done by a naqash, Aziz Mughal. “This is probably the oldest reference we have in Kashmir to a papier mache (naqashi) artist. Even today in Srinagar, we find a few papier mache artists belonging to the Mughal (Mughalu) family who live in a mohalla which also goes by their family name-Mughal Mohalla.”

He tweeted that the binding of this rare copy of the Qur’an explains that the naqashi on the book cover is broadly based on two interlinked motifs-  Gul-i Vilayat (the Persian/English flower) and Gul ander Gul (flower within a flower).

Elaborating, he said, “The Gul-i Vilayat depicts rose along with a realistic representation of thorn, leaves and stem and is generally said to be inspired by English (or European models). The Gul ander Gul is a more traditional representation of the Kashmiri rose – as a floral scroll, sometimes intermixed with a variety of other flowers like carnation, narcissus etc.” He sees the smaller margin of the copy as that of khatai-posh (aster)”.

He said, “What can also be seen on the main margin is the presence of two paisley motifs on either side. Kashmiri artisan refers to it as badamdar (almond-shaped), given that in Kashmir the motif is believed to originate from a highly stylized version of almond (or some would say cypress)”. He added, “Badam (almond) is also a motif widely employed in Kashmiri Pashmina shawls, a reason why some refer to badamdar as shawl tarah (the shawl design).”

According to him, traditionally, most Kashmiri Qur’an mushaffs (written copies of Qur’an) are written in naskh (a smaller, round script of Islamic calligraphy) with the surah (chapter) headings in thuluth (a script variety of Islamic calligraphy). Sometimes, however, manuscripts also include Persian translation or commentary in nastaliq (the main calligraphic hands used in writing the Persian and the Urdu alphabets).

He said the pages of the Qur’an auctioned in London are illuminating by incorporating text in a central medallion-like feature with quarter medallions at the corner is a technique known as chand dar (moon-style) which was employed in shawl designs up till mid-nineteenth century.

“The overall dominant colour scheme in these illuminated Qurans is of blue, defined by red, golden and green colour. Generally, the Quran from Kashmir would be written in black ink, with the subtext (translation/tafsir) in red ink. We also have extant manuscripts written in saffron,” the portal said.