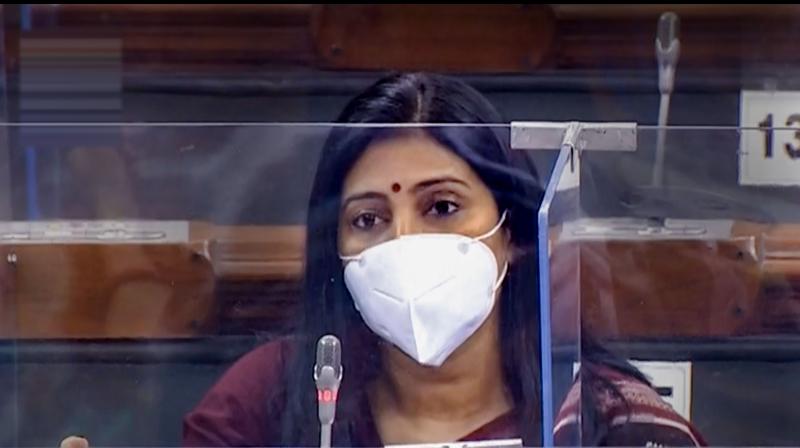 The monsoon session of Parliament began on Monday with MPs wearing masks and seated behind glass partitions. This is Apna Dal (Sonelal) MP Anupriya Patel in the Lok Sabha. (PTI)

New Delhi: On Monday, Parliament sat for its monsoon session of Parliament. The mood was considerably chastised since its previous sitting on the last day of the budget session back in March.

On March 23, when Parliament wound up its budget season, there were 499 cases of coronavirus and 10 deaths in the country. By Monday, when MPs shuffled into their sanitised seating arrangement, the number had ballooned to 4.9 million cases and 80,000 deaths.

The corona case load includes 25 MPs — 17 of the Lok Sabha and 8 of the Rajya Sabha.

Of the 17 Lok Sabha MPs, 12 are from the BJP, with prominent ones being Meenakshi Lekhi and Parvesh Verma (both from Delhi) and controversial MP Anant Kumar Hegde. Two YSR Congress MPs were positive, while the Shiv Sena, DMK and RLP have one MP each affected by Covid-19.

About 200 MPs are above 65, including some in the 85-90 age bracket, most prominent among them being former prime minister Manmohan Singh, a Rajya Sabha member, who is 87.

Incidentally, while briefing the Lok Sabha on the government's handling of the Covid situation by the Centre, health minister Harsh Vardhan said it had done “very well”.

Interestingly, prime minister Narendra Modi, addressing the media prior to the start of the session, acknowledged it was being held “under special circumstances as there is a corona pandemic on the one hand while our obligation towards fulfiling our duties lies on the other”.

He said several important decisions would be taken during the session, and “the more diverse the discussion is in the House, the more beneficial it is for the country”.

Elaborate arrangements have been made by the Lok Sabha Secretariat as the session is being held while the pandemic seems to have peaked again across the country.

It is estimated that 56 persons have tested positive within the entire Parliament House complex, which include MPs, personnel from the Lok Sabha and Rajya Sabha secretariats and also mediapersons.

Sources said these people tested positive during the RT-PCR tests which were conducted in the Parliament complex prior to the session’s start.

Earlier, at least seven Union ministers and around 25 MPs and MLAs had contracted the disease. Among them is home minister Amit Shah, who after undergoing the mandatory quarantine period last month, had to be admitted again to AIIMS a couple of days ago.

He had earlier been admitted there on August 18 for post-corona care but was discharged on August 30-31.

In a first, all MPs marked their attendance through an app called Attendance Register on the first day of the session, Lok Sabha secretariat sources said. Normally MPs sign the attendance register that is kept outside each House.
Speaker Om Birla welcomed the MPs, saying it was an extraordinary occasion, and urged them to follow all arrangements and guidelines for safety during the Covid-19 pandemic.