Godavari river has been in spate for the past few days and over 5.13 lakh cusecs of floodwater was flowing when the mishap occurred. 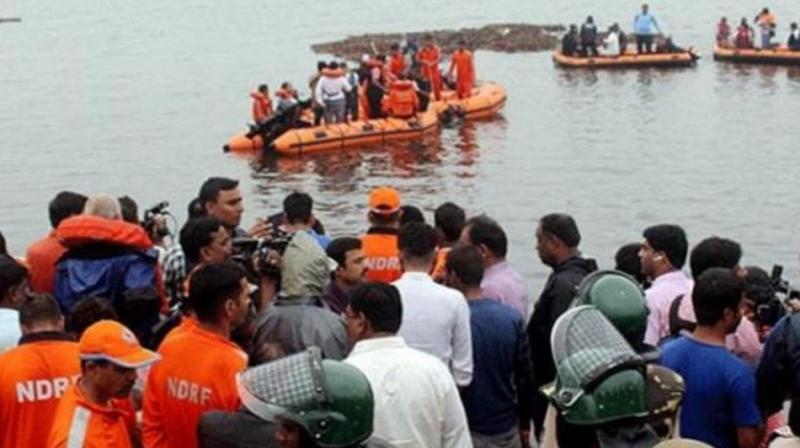 The exact details of the mishap were not immediately available. (Photo: ANI)

Amaravati: Twelve people have died and more than 30 were missing when a tourist boat capsized in the swollen Godavari river in East Godavari district of Andhra Pradesh on Sunday afternoon while over 23 passengers were said to have been rescued, police sources said.

The exact details of the mishap were not immediately available. The boat was carrying 63 people.

The boat, operated by the Andhra Pradesh Tourism Development Corporation, had started off for the picturesque Papikondalu mountain range, a prime tourist destination, from Gandi Pochamma Temple near Devipatnam, news agency PTI reported.

The accident took place near Kacchuluru village in Devipatnam Mandal.

The river has been in spate for the past few days and over 5.13 lakh cusecs of floodwater was flowing on Sunday afternoon when the mishap occurred.

Helicopters of the Oil and Natural Gas Corporation (ONGC) and teams of the National Disaster Response Force (NDRF) are  rescue.

Prime Minister Narendra Modi said he was "extremely pained" by the incident.

"Extremely pained by the capsizing of a boat in Andhra Pradesh's East Godavari. My thoughts are with the bereaved families. Rescue operations are currently underway at the site of the tragedy," he tweeted.

Sources said there were about 63 people, including 11 crew members, in the boat run by the Andhra Pradesh Tourism Development Corporation.

The boat started off for the picturesque Papikondalu, a prime tourist destination, from Gandi Pochamma Temple near Devipatnam and it capsized near Kachhuluru, the sources said.

The Chief Secretary directed that a helicopter be pressed into service to trace the boat mishap victims.

Police and other rescue teams have started off from East and West Godavari districts for the accident spot, but it could take some time for them to reach there because of the swollen state of the river, official sources said.