Renaming hardly a game-changer in UP

The name-changing trend began in Uttar Pradesh in 2007 when the BSP came to power and Mayawati renamed eight districts. 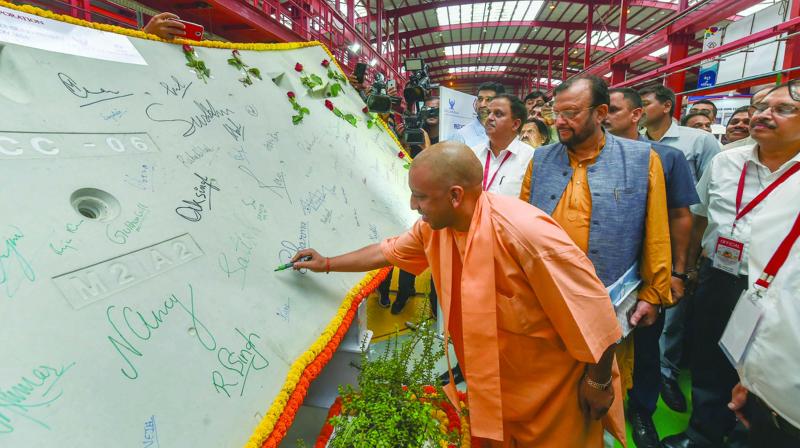 Uttar Pradesh chief minister Yogi Adityanath during a visit to metro hub on completion of one year of Lucknow Metro in Lucknow.

The BJP government in Uttar Pradesh led by Yogi Adityanath seems all set to name a number of places after late PM and party icon Atal Behari Vajpayee. In the past, Mayawati also dedicated public buildings and places after BSP founder Kanshi Ram.

Lucknow: Does changing names of government buildings and schemes prove to be a game-changer? In the past one decade, every political party in Uttar Pradesh seems to have believed that it does.

When the renaming process is complete by the end of the year, Lucknow alone will have more than two dozen public spots and facilities named after Vajpayee.

The Yogi government began its name-changing spree two months ago when it decided to rename the iconic Mughalsarai railway station (which is the fourth busiest railway junction in the country) as Deendayal Upadhyaya Junction. The move was a mark of respect toward BJP’s co-founder.

The state government is now set to change the name of Allahabad to Prayag Raj before the 2019 Kumbh Mela. Saints claim that the original name of this historic city was Prayag Raj and the Mughals had changed it to “Allahbad” which later became Allahabad.

Even before the official renaming takes place, all signage in the upcoming Kumbh Mela township in Allahabad have the name “Prayag Raj” on them.

If sources are to be believed, some other districts in Uttar Pradesh that have “Muslim sounding names” like Aligarh, Azamgarh, Shahjahanpur, Ghaziabad, Ferozabad, Farukkhabad and Moradabad could be given new names, but that may happen next year.

The name-changing trend began in Uttar Pradesh in 2007 when the BSP came to power.

The changes in names not only incurred huge financial losses due to repainting of signage and reprinting of official stationery, but also led to widespread confusion. There were instances of people boarding wrong buses and sending postal goods to wrong addresses.

Almost everyone felt that places that have been known traditionally by one name - howsoever irrelevant they may be -- remain etched in people’s mind while new names are not remembered easily.

Ms Mayawati had also renamed the prestigious King George’s Medical University (KGMU) as Chhatrapati Shahuji Medical University. This had the alumni of the KGMU, popularly known as Georgians worldwide, up in arms.”Will we be known as Shahujians now?” asked the USA Georgians Association.

However, the game of changing names did not help the BSP which lost the 2012.

Samajwadi Party chief Akhilesh Yadav, who formed the next government, lost no time in restoring the original names of many public institutions. He was also cautious not to rename places. Instead, he built new parks and buildings that he named after the Samajwadi icons. These included Janeshwar Misra Park and JP International Centre.

Ms Mayawati expectedly slammed the SP for “insulting the dalit icons and leaders” and tried hard to mobilise her dalit voters on the issue. She did not succeed and drew a blank in the 2014 Lok Sabha elections. A proof of the fact that name changing is not always a game-changer.